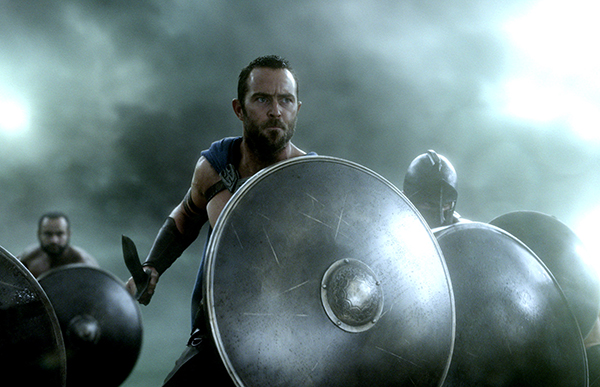 This image released by Warner Bros. Pictures shows Australian actor Sullivan Stapleton as the Greek leader Themistocles in “300: Rise of an Empire.”[AP/NEWSIS]

SEOUL, NEW YORK - Seven years after Zack Snyder’s “300,” a movie featuring shirtless and barbarous warriors from the Greco-Persian Wars, dominated the Korean box office, its sequel, “300: Rise of an Empire,” directed by Noam Murro, once again debuted strongly in No. 1. The follow-up garnered 661,909 admissions, taking in 5.8 billion won, or $5.4 million.

Set in ancient Greece, “300: Rise of an Empire” is a blood-splattered sequel to the 2007 blockbuster “300.” It takes place before and after the earlier film when 300 Spartans marched to their deaths in a battle against the Persians.

In the sequel, an alliance of Greek city-states wage battle on the seas against the Persians.

Both films are based on graphic novels written by Frank Miller. “300: Rise of an Empire,” stars Australian actor Sullivan Stapleton as the Greek leader Themistocles and French actress and model Eva Green as Artemisia, the ruthless commander of the Persian forces.

In third came the Korean movie “Miss Granny” with 145,181 admissions. Released on Jan. 22, the comedy has, surprisingly, maintained the No. 3 spot for three consecutive weeks, despite a flow of Hollywood blockbusters. “Miss Granny has now made 61.1 billion won.

In the fourth slot with 108,202 admissions was “12 Years a Slave,” the tragic story based on true-life events of a free black man in the 19th-century United States who was sold into slavery. In its debut weekend, “12 Years” was just the No. 6 movie in Korea, so winning the best picture prize at the Academy Awards apparently gave the film a decent boost.

Two other Korean movies made the top 10. In seventh place was “Tabloid Truth,” which added 78,626 admissions to bring its three-week total to nearly 1.2 million.

Walt Disney’s huge hit “Frozen” landed at No. 6, adding another 96,000 admissions to reach nearly 10.2 million since Jan. 16. The movie has done so well that Disney has released a sing-along version for Korean theaters, where the song lyrics are presented on screen and audiences are encouraged to belt out the famous tunes.

Over in the North American market, “300: Rise of an Empire” may have won the weekend, but the animated film “Mr. Peabody & Sherman” also did well.

“Mr. Peabody,” based on the “Peabody’s Improbable History” segments in the 1960s animated TV show starring the characters Rocky and Bullwinkle, collected ticket sales of $32.5 million at U.S. and Canadian theaters.

Featuring the talking dog Mr. Peabody and his adopted boy, Sherman, the movie exceeded studio 20th Century Fox’s expectations for an opening from about $25 million to $30 million.

“With nostalgia in play, this film was geared toward both adults beyond the traditional family film audience, while introducing the characters of Sherman and Mr. Peabody to a new generation of kids who had never seen them,” said Chris Aronson, president of domestic distribution for Fox.

Aronson said he expected to film to continue to perform well in the coming weeks, noting “there’s not an animated film for another month, and with spring holidays approaching we’re in a really good place.”

The movie was directed by Rob Minkoff, who also directed the 1994 animated film “The Lion King.” That film was nominated for four Academy Awards and won two Oscars for its music.

Last week’s box office winner, “Non-Stop,” was third with $15.4 million in sales. The film stars Liam Neeson as an alcoholic U.S. air marshal racing to stop a string of murders on an international flight.

“The Lego Movie,” took the No. 4 overall spot with $11 million, according to Rentrak. The animated hit based on the colorful plastic building blocks has now totaled $225 million since Feb. 7.