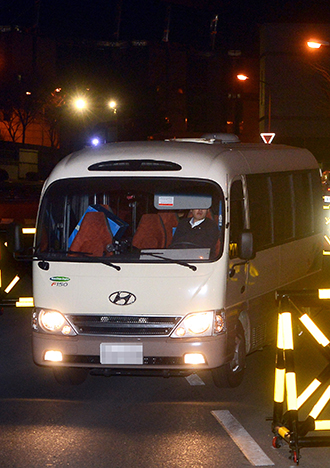 A bus leaves the headquarters of the National Intelligence Service yesterday after a prosecution raid. [NEWSIS]

The prosecution said yesterday that a National Intelligence Service agent confessed to being involved in the fabrication of a key document in a case to charge a North Korean defector, Yu Wu-seong, 34, for espionage.

So far, the Chinese Embassy in Seoul has confirmed that all three of the documents the top spy agency provided to the prosecution were fabricated: the entry and exit records of the suspect between North Korea and China and the two confirmation letters for those records that were issued in the name of the Helong police in China and the immigration office in Sanhe County, respectively.

During a series of questionings, Lee In-cheol, a spy agent who worked at the Korean Consulate General in Shenyang, China, confessed that when he received the third document in the name of the Sanhe immigration office from an outsourced broker, he was aware that it had been fabricated.

Additionally, Lee wrote a new note himself, adding to the fabricated document. In the note, he said that based on the document they obtained from the broker, the evidence provided by Yu’s attorneys in the case - also provided by the Chinese government - was fabricated.

“After inquiring about the materials [of the attorneys] at the Sanhe immigration office, we found that they were not legal documents,” Lee said in his own note. He then added it to the fabricated documents and sent them to the prosecution.

The case against Yu goes back to the trial held in August 2013, when the 34-year-old defector was acquitted of charges of spying for North Korea. At the time, the prosecutors argued that Yu, who worked as a civil servant in South Korea, leaked the personal information of 200 defectors living in the capital to the North Korean regime.

The prosecution claimed Yu visited North Korea twice in 2006 via China, between May 23 and May 27, and May 27 and June 10. Yu admitted to taking the first trip, saying he attended the funeral of his mother. However, he denied the second trip.

Yu was acquitted of those charges by a local court, though the prosecution appealed the verdict and submitted to the court three documents from the spy agency seeking to prove Yu’s visit to the Communist state.

By law, the fabrication of a document in the name of his official title, a consul, is considered falsification of a public document. On this charge, he could be sentenced to up to seven years in prison. The NIS has officially said in its statements that its agents were unaware the documents they received from the outsourced brokers were fabricated.

During questioning, Lee allegedly told prosecutors, “Ordered from the headquarters [of the NIS in Seoul], I fabricated the confirmation note and sent it to the prosecution.”

With his confession, the prosecution is now targeting the anti-North Korea espionage department in the NIS, under which Lee belongs. Additionally, the prosecution found that another NIS agent was also involved in the fabrication. The prosecution believes that the agent, only identified as “Boss Kim,” apparently hired the ethnically Korean broker, also surnamed Kim, and directed him to obtain the fabricated confirmation letter.

The prosecution said they will soon summon the broker, who is still in the hospital after a failed suicide attempt, for questioning. The prosecution is scheduled to apply to the court today for an arrest warrant for the broker for immediate detention.

Except for the Sanhe immigration document, the prosecution also found that the two other documents were obtained by different brokers in China who were hired by the NIS.

“When the first trial acquitted the defector [Yu] of the [espionage] charge in August 2013, the prosecution seemed to feel pinched and asked for cooperation with the NIS,” a prosecution official said. “So the NIS launched its own operation to collect evidence behind-the-scenes.”

Currently, prosecutors are analyzing the computer hard disks and emails they confiscated from the NIS in a raid on Monday to determine how many NIS officials are involved.