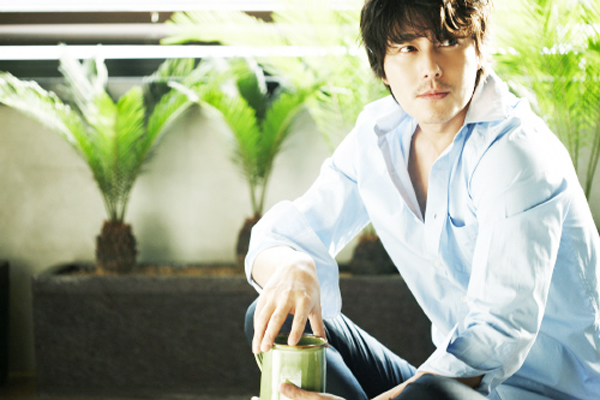 The 40-year-old star was spotted shooting the first scene of the film last week at a park in Namwon, South Jeolla, with the model turned actress Lee Som.

“Madame Bbaeng-deok” is a loose adaptation of the Korean mythical tale “Shimchungjeon” (the tale of Shim Cheong), which depicts young Shim Cheong’s journey to save his blind father.

The 2014 version of the story will twist the classic plot, highlighting the tragic romance between the female character Deok (Lee Som), and Hak-gyu (Jung Woo-sung).

“In contrast to the original tale, father’s role will be lessened in the movie,” said an official of the production team through a press release.“Instead, we will show how love can lead a man go blind, both figuratively and literally.”

After making his debut in the 1994 film “Gumiho,” Jung Woo-sung starred in many successful films, including “Beat” (1997), “The Good, the Bad, the Weird” (2008) and “Cold Eyes” (2013). He has been one of the most popular heartthrobs in the Korean entertainment scene over the past decades.

“Madame Bbaeng-deok” is slated to be released in the latter part of the year.