Broken bone in left knee KO’s Kobe for the season

Broken bone in left knee KO’s Kobe for the season 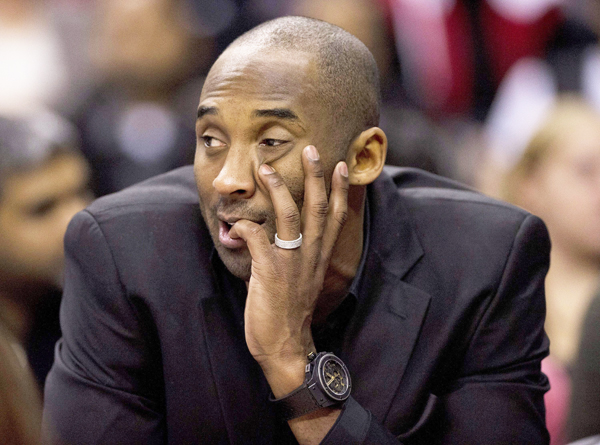 In this Jan. 19 photo, Kobe Bryant watches from the Los Angeles Lakers’ bench during the first half against the Toronto Raptors. The 36-year-old Bryant won’t be back on the court this year.[AP/NEWSIS]

Kobe Bryant won’t be back on the court for the Lakers this season.

Bryant expressed only mild frustration Wednesday after the long-expected decision to end his 18th NBA season after just six games. The superstar guard’s broken bone in his left knee has kept him out since shortly before Christmas, and it still hasn’t healed enough for weight-bearing exercise.

With just five weeks left in their injury-ravaged season, the Lakers (22-42) elected to preserve Bryant for next year, when he’ll be 36. And though Bryant has barely played, he is determined to make sure the Lakers’ failures of this season aren’t repeated in 2014-15.

The Lakers’ ruthlessly competitive scorer can’t take much more of this incompetence from his 16-time NBA champion franchise.

“I feel like killing everybody every time I go to the arena,’’ said Bryant. “I’m just on edge all the time. Yeah, I still feel it, probably more than anybody in the organization does. I probably feel it more, and it drives me absolutely crazy.’’

Bryant clearly identified the Lakers’ top offseason priorities in his mind, and they didn’t include specific free-agent additions.

The fourth-leading scorer in NBA history called on the Lakers’ front office - and owner Jim Buss, in particular - to set “a clear direction’’ for the franchise’s return to the top after they miss the playoffs this spring for just the second time in his career.

Exactly 11 months after tearing his Achilles, Bryant remained confident he can return in something close to top form. He plans to approach his remaining rehabilitation as “a seven-month training program,’’ giving him ample time to rebuild strength in his left leg.

“I don’t want to say I’ll be back at the top of my game,’’ Bryant said. “Because everybody is going to think I’m crazy, and it’s the old-player-not-letting-go sort of thing. But that’s what it’s going to be.’’

Bryant missed the first 19 games of this season after tearing his left Achilles’ tendon last April, returning Dec. 8. The five-time NBA champion was back in uniform for just 10 days before fracturing the top of his shinbone in Memphis.

The Lakers initially thought Bryant could return shortly after six weeks of recovery, but the bone has been slow to heal.

Los Angeles began the day in a three-way tie for last place in the Western Conference with 29 losses in its last 38 games heading into Thursday’s trip to Oklahoma City.

Steve Nash hasn’t been formally shut down for the season, but D’Antoni indicated it’s also unlikely the two-time MVP guard will return this season.