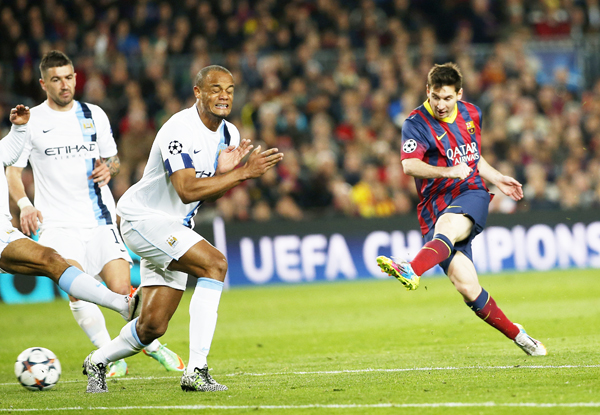 FC Barcelona’s Lionel Messi, right, shoots on goal during a round of 16 Champions League match against Manchester City at the Camp Nou Stadium in Spain.[AP/NEWSIS]

Barcelona advanced with a 4-1 victory on aggregate over two legs in which referee decisions - and non-decisions - played a big part.

City defender Joleon Lescott replaced Martin Demichelis, who was sent off in the first leg, and had just as much trouble keeping up with Messi throughout the game at the Camp Nou.

But Lescott was unlucky as Cesc Fabregas’ pass went through his legs in the 67th minute into the path of Messi, who flicked the ball over goalkeeper Joe Hart with a sublime touch.

As in its 2-0 defeat in the first leg, City finished with 10 players after Pablo Zabaleta was booked for a second time in the 78th minute for protesting after Gerard Pique barged into substitute Edin Dzeko inside the area without a penalty being awarded.

Vincent Kompany scored a consolation goal for City in the 89th minute before Alves struck in stoppage time for the Spanish champions.

In the night’s other match, Paris Saint-Germain advanced to the quarterfinals for the second straight season after coming from behind for a 2-1 win over Bayer Leverkusen and a 6-1 victory on aggregate.

Both teams rebounded with strong performances after limping into the match on the back of domestic losses.

“We had some pretty big setbacks, especially in the way we were playing - but today we got back to playing the way we know, the way the Barca people love.’’ Messi said. “Even though the goal came in the second half, I don’t think we were ever in danger of an upset.’’

City managed to create good scoring chances from the boots of David Silva and Yaya Toure, but manager Manuel Pellegrini could only bury his head in his hands when Messi scored his eighth goal of the competition.

While Barcelona did not look in danger of an upset, City will certainly feel aggrieved after Pique was not penalized for his sliding tackle from behind, which saw furious City players surround referee Stephane Lannoy and Zabaleta dismissed.

Much of City’s hope of overcoming the deficit lay in Sergio Aguero’s return after he missed the first leg, but the Argentina striker also seemed absent Wednesday despite starting ahead of Alvaro Negredo and Dzeko.

Pellegrini watched from the stands as the Chilean served a ban for his criticism of referee performance in the first match.

Though Silva passed up a promising opportunity early on, Barcelona was sharp as Messi repeatedly ran at - and past - Lescott, who seemed to have gotten away with a trip on the Argentina forward inside the area in the early stages.

Messi exploited City’s slow-footed defense to register his 28th goal of the season, after having found the post earlier on.