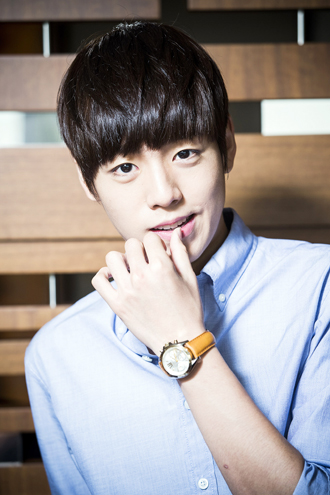 Twenty-year-old actor Lee Hyun-woo held his first fan meeting in Shanghai on the weekend. “Thank you for the warm greetings! Your support gives me energy for my next moves,” said Lee at Yun Feng Theater on Saturday.

As Lee celebrates his 21st birthday next week, his Chinese fans prepared a birthday cake for him on stage.

Since debuting on TV at the age of 11, Lee has grown into one of the most popular young heartthrobs in Korea.

In 2012, he starred in the SBS drama “To the Beautiful You,” with such K-pop stars as Choi Min-ho of SHINee and Sulli of f(x).

But what took his popularity to new heights in China was his performance in last year’s hit “Secretly, Greatly,” in which he played a school boy who idolizes a neighbor - played by Kim Soo-hyun, who is one of the hottest stars around these days - not realizing he is a North Korean spy.

Meanwhile, his new film, “The Technicians,” is scheduled to be released in the latter part of the year. The film has gotten much attention from both the media and Lee’s fans, in part because the film will pair up Lee with rising star Kim Woo-bin.