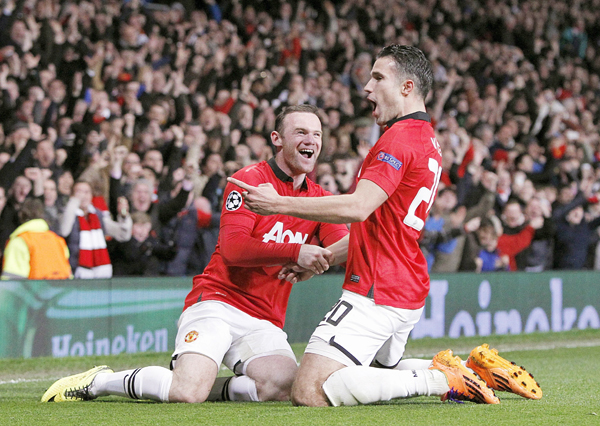 Manchester United’s Robin van Persie, right, celebrates with Wayne Rooney after scoring the team’s third goal and his hat-trick during the Round of 16 Champions League second leg match against Olympiakos at Old Trafford, Manchester, Wednesday. [AP/NEWSIS]

United, mounting a dismal defence of their Premier League title in Moyes’s first campaign since replacing Alex Ferguson, kept alive their last remaining hope of a trophy this season.

Asked to show character by their manager, United responded with Van Persie showing a clinical edge that has been missing of late while the recalled Ryan Giggs was also instrumental in his first start since late January.

Van Persie began the Old Trafford comeback with a 25th-minute penalty, awarded after he had been shoved in the back by Jose Holebas.

The Dutchman levelled the tie on aggregate in first-half stoppage time, steering in Wayne Rooney’s cross, and Van Persie completed his hat trick with a free kick that left Olympiakos keeper Roberto rooted to the spot six minutes after the break.

Moyes, who cut a defiant figure this week despite his troubled start, praised a “magnificent team performance.”

“There were no passengers tonight, everyone fought their corner and we played some really good football,” the Scot told a news conference after United joined Premier League leaders Chelsea as the only English representatives in the last eight.

“It’s especially pleasing as we did not play well in the first leg in Greece but came back strongly tonight.

“We might not be favorites to win the Champions League this season but if we go into the quarterfinals as underdogs that’s fine by me.

“With this squad, this club can be more than a match for anyone.”

Giggs provided the passes for two of the goals on his 140th appearance in the competition, just two off the record held by Raul. He said, “It was always going to be tough not to concede a goal and to score three goals but we managed it. The crowd got us over the finishing line. Hopefully tonight can be the turning point in our season.”

Only twice in their long European history had Manchester United recovered from a 2-0 first leg defeat to advance, the last time 30 years ago when they came back from the same first leg score to beat Barcelona 3-2 on aggregate in the European Cup Winners Cup quarter-finals.

They also had history on their side because Olympiakos had lost all of their previous 11 European matches in England and had not scored a goal against United in their two previous meetings at Old Trafford.

A repeat performance of the famous 1984 comeback over Barca appeared possible after United started with a much brighter tempo than they showed at any time in their humbling 3-0 defeat by Liverpool in the Premier League on Sunday.

After Arsenal loanee Joel Campbell went close in the second minute for the Greeks, United took control of the game with Giggs, Danny Welbeck and Antonio Valencia dominating the midfield both centrally and on the flanks.

Giggs picked out Rooney to head against the foot of the post after 18 minutes and it was from another angled delivery that Van Persie was pushed over by Holebas to put United ahead from the spot.

Giggs was involved in United’s second, finding Rooney with another flighted pass for the striker to cross low for Van Persie to steer past Roberto.

United could never relax at the back with Olympiakos a constant threat on the counterattack, and it required a superb double save from goalkeeper David De Gea to keep the Greek side out.

He first kept out a header from David Fuster, then the follow-up from Alejandro Dominguez to keep United in the tie.

Van Persie’s free kick early in the second half proved decisive, although the Dutch striker was carried off on a stretcher in the final minutes with an apparent leg injury.