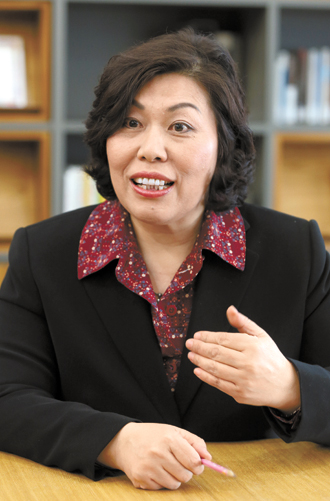 Lee Sun-hee, the leading medical director in the psychiatry and psychotherapy department at the University Hospital of Cologne, had to overcome multiple hurdles to get where she is today. When she decided to become a doctor in Germany, she knew it wouldn’t be easy, and that her age and foreign status could serve as a hindrance.

She initially traveled there intending to study for her doctorate in philosophy. But rather than pondering what others had to say, she decided to focus on herself instead and what she could achieve.

“It’s my life,” Lee said in an interview with the JoongAng Ilbo, “and no one knows my talents as much as I do.”

Lee said she set out to pursue her doctorate at Germany’s Ruhr-University of Bochum in 1983 after obtaining her bachelor’s and master’s degrees in philosophy at Ehwa Womans University.

The 56-year-old recently visited Seoul to attend the 60th anniversary of the publication of the school’s newspaper. While there, she was awarded for her distinguished achievements in her field.

Lee’s master’s thesis was centered on Georg Wilhelm Friedrich Hegel, and the University of Bochum had a research center named after the German philosopher and idealist. But when she arrived in Europe, she changed her mind.

“Back in the ’80s, Korean society was fiercely intense on sociopolitical issues,” Lee said. “But the professors there [in Germany] were traveling around to buy old journals that Hagel wrote a long time ago. It just felt like something was static.”

Having always been confident in science and math, Lee decided to go to medical school.

“People didn’t ask me why I wanted to become a doctor,” Lee said. “Instead they told me outright that I couldn’t because I had majored in humanities and liberal arts.”

She was accepted into the University of Cologne at the age of 27. And after studying for six years, she was finally assigned a residency at the surgery department - then the most competitive division.

It was during this time she discovered that most of her terminal patients found her company and bedside manner pleasant. She made them feel at ease, she was told, and as a result they took sedatives less often to ease their pain.

This gave her the idea of switching to psychotherapy. Once again she was faced with opposition, and this time it was the language barrier. Lee was told her German wasn’t advanced enough for psychotherapy and that most foreign students took anesthesiology or radiology courses, which didn’t require excellent German.

But, once again, Lee accepted the challenge.

Her knowledge of philosophy helped her during interviews, she insisted, as psychotherapy and philosophy traditionally have strong ties in Germany. Lee added that said she won over her interviewer by citing Sigmund Freud’s “The Interpretation of Dreams.”

Yet, even after she got her foothold, she still faced discrimination, with some patients threatening to leave if they were forced to be treated by a foreign doctor.

However, Lee said she countered those remarks every time, telling them that it would be more beneficial to be treated by someone like herself, who was from a different culture.

“In overcoming all the discrimination against me, I become a true citizen,” Lee said to her doubters.

Her attitude turned out to be so impressive, in fact, that when she decided to quit a month later, she received letters from patients requesting she stay. Being an Asian with knowledge in philosophy actually helped, Lee said, and led her on the path that has now become has a nearly 30-year journey.

She added that her last challenge will be getting her doctorate in philosophy, but she admitted, “I’m not planning on becoming a philosophy scholar again, I just want to end what I started.”