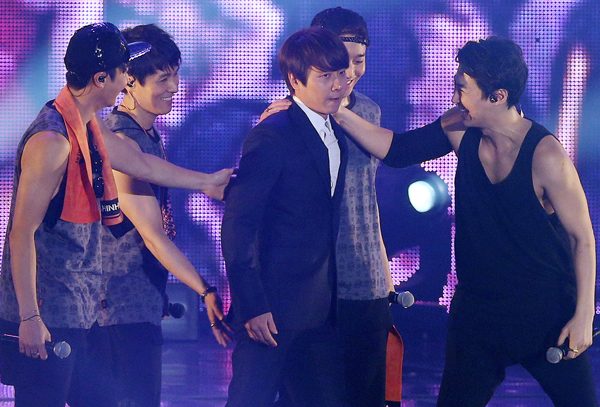 Classic K-pop group Shinhwa spent a memorable weekend celebrating its 16th anniversary in concert. Along with its performance, the group prepared another surprise for its loyal fans: Andy Lee.

The news about Andy’s appearance at Shinhwa’s concert sparked considerable attention from local media because it was his first time meeting fans since becoming embroiled in a gambling scandal last year along with several other entertainers.

Shinhwa initially told fans that Andy would not join the 16th anniversary show, since it was too early to return to the stage after the scandal. However, after performing more than 30 songs, the group surprised the audience by bringing out Andy.

“I was quite hesitant to be back to you [fans], since I couldn’t gather the courage. I really wanted to say I was sorry. I missed you so much, and I’ll make it up to you by becoming a more mature person. Thank you all,” said the 33-year-old singer.

Meanwhile, the group announced at the concert that it is planning to release its 12th full-length album later this year.