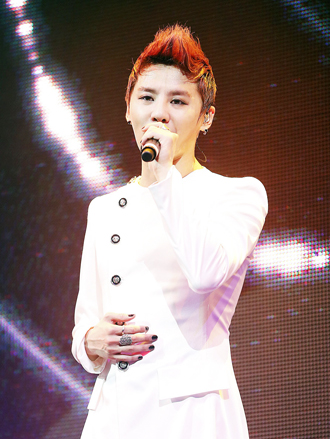 Singer Kim Jun-su of the K-pop trio JYJ will throw a spring concert in Japan, according to his agency, C-Jes Entertainment, on Friday.

In his “2014 Xia the Best Ballad Spring Tour,” Kim will perform ballads for his Japanese fans from Tokyo to Osaka.

After opening in Tokyo May 13-15 at Yoyogi National Stadium, he will head south a week later to sing in Osakajo Hall, which can accommodate 16,000 people.

“The repertoire will be not much different from his recent ‘Ballad & Musical Concert,’ in which Jun-su showed an orchestral performance of his ballad numbers,” said a C-Jes official. “Yet there will be some changes in the songs, since Jun-su is thinking of adding Japanese songs to please his fans.”

The agency also said Jun-su will feature some numbers from the musical “Mozart!” and “Elisabeth,” in which he starred. After joining his new agency, Kim put an emphasis on his career as a musical performer and has gained wide recognition from both musical fans and critics.

In the 2012 Korean Musical Awards, Kim received an award for best male performer for his portrayal of “Death” in “Elisabeth.”