In theater, sex sells for women, too

In theater, sex sells for women, too 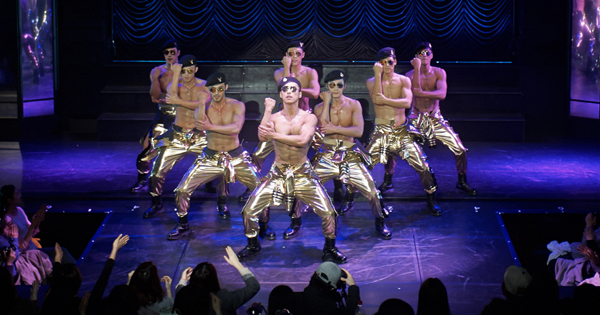 “Ladies and ladies!” welcomed the show’s host, Kim Ho-young. “Tonight, the hottest guys in the town will tear their shirts into pieces, take off their pants and dance all night for you!”

And for the next 70 minutes that’s what they did. There was nothing in the way of a story. It was just eight handsome men - sometimes clad in classic suits, sometimes in high school uniforms and other times dressed as warriors - but never fully clothed for very long. “Mister Show” is just pure sexual fantasy for women. Sometimes the men tore off their pants and danced only in their underwear.

“It was quite surprising to see those sexy moves,” said a 31-year-old professional woman, who identified herself only by her surname, Park. When asked if she was upset about the show, she replied, “No, I think the producers knew where to draw the line.”

As for the producer, Kolleen Park, she calls the show “bright, healthy and merry.”

“We decided to produce ‘Mister Show’ because today’s Korean women need a place to release their stress,” said Jung Ji-won, the head of the company behind “Mister Show.”

However controversial the show may sound, it mostly reflects the rising role of women as consumers in Korea’s musical industry. Musicals have grown exponentially over the past decade, largely thanks to the enthusiasm of female fans, and producers are now targeting women more directly than ever.

A glance at the hot new musicals of this season reveals a lot more roles for actors rather than actresses. The musical “Frankenstein,” playing at Chungmu Art Hall in central Seoul, features five actors in all of the major roles, but the female characters play no major roles in the story. Since it opened last month, “Frankenstein” has been at the top of the sales chart on Ticketlink, a major ticketing website.

The growing power of the female audience has even changed how romance is portrayed on the stage.

In the play “M. Butterfly,” which is based on the 1988 play by David Henry Hwang, a homosexual romance between a French diplomat and a male Peking opera singer is played out by Lee Seung-joo and Kim Da-hyun, both of whom have strong female fan bases.

Even the musical “Seopyeonje,” now in its third season, has shifted its focus to the male performers from this year. In order to appeal to women, the producers added a new musical number especially for the leading male character, Dong-ho. The original pansori (Korean traditional opera) was also pepped up with a more contemporary vibe by casting Jung Byung-hee, better known as G.O. of the K-pop boy band Mblaq.

“The trend in musicals shows that women are the key consumers,” remarked popular culture analyst Jung Deok-hyun. “The change can also be seen in television drama as well: from the SBS drama ‘My Love From the Star’ to JTBC’s ‘Secret Love Affair,’ it isn’t too hard to notice how the market tries hard to satisfy women’s fantasies.”

However, Won Jong-won, a professor of mass communications at Soonchunhyang University, thinks producers are being “simple-minded.”

“What women really want is not merely to see a bunch of attractive male actors,” Won said, adding that producers need to think creatively to expand the overall musical industry.