DSP invites you to become a pop idol

DSP invites you to become a pop idol 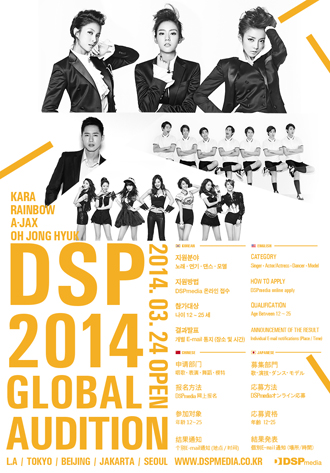 Want to become a K-pop star? This could be your chance. Leading K-pop entertainment agency DSP Media plans to recruit the young and talented stars of tomorrow in several cities.

Last week, the agency announced the “2014 Global Audition” on its website. According to the post, any talented entertainers can apply for the auditions, which will be held in Beijing, Tokyo, Los Angeles, Jakarta and Seoul.

Unusually, the company even said there was no age limit. Finalists will win the chance to be trained for the agency’s next idol group.

Launched in 1991, DSP has been behind several of the top K-pop groups, such as Sechs Kies, SS501, FinKL and Click-B. More recently, DSP has managed Kara and Rainbow.

To apply for an audition, check out the company website: dspmedia.co.kr.