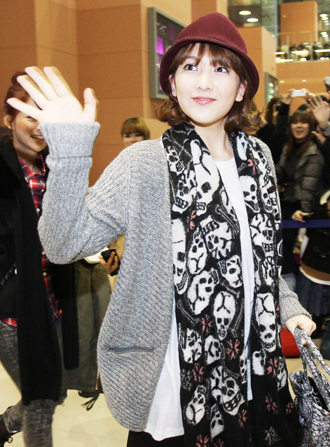 Kang Ji-young, a former member of the girl group Kara, terminated her contract with her agency, DSP Entertainment, on Saturday and left for London to study abroad, according to local media.

“Kang Ji-young left this morning for language and acting training. With her departure, her contract expired as well,” said an official from the agency on Saturday.

In January, the 20-year-old singer said she did not plan to extend the contract and also was considering leaving Kara. Her comments came just after it became known that Nicole would leave the group.

“Kang was recently taking time off to prepare to study abroad. We respect her decision and we wish her the best,” added the agency.

Kara will carry on with the three remaining members - Park Gyu-ri, Han Seung-yeon and Goo Ha-ra - and the group’s new album is scheduled to be released in the second half of the year.