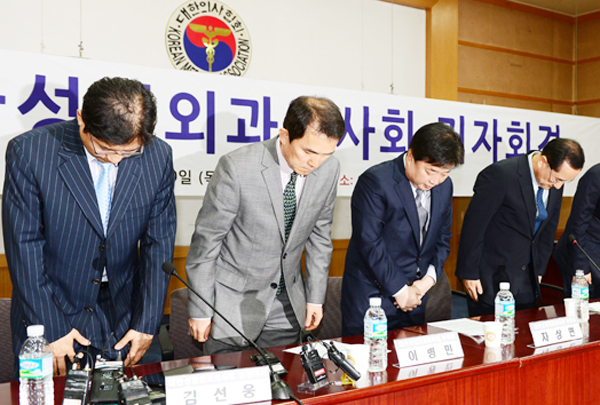 The association of plastic surgeons has called for soul-searching in the industry and stricter ethical standards for doctors following a case in which a 19-year-old woman lost brain function during an operation at Grand Plastic Surgery Clinic in southern Seoul.

The woman’s parents said the clinic had performed the surgery without notifying them and put their daughter under general anesthesia despite the fact that rhinoplasty and double-eyelid procedures don’t typically require strong anesthetics. The 19-year-old is currently brain dead.

The Korean Association of Plastic Surgeons revealed the results of an internal investigation into whether other cosmetic clinics performed unethical operations.

Lee Sang-mok, the president of the association who also led the probe, said that his team had discovered instances of ghost surgery among doctors, which is the practice of substituting one surgeon for another without the patient’s knowledge.

The association also acknowledged that some doctors would administer to patients large doses of sleeping pills in order to conceal the fact that a different surgeon was performing the operation.

The president attributed such cases to excessive competition in the industry and low moral standards among surgeons.

“Plastic surgery requires a high level of ethics, as well as concentration and extensive medical knowledge,” Lee said. “But because cosmetic surgery has become so popular among many Koreans, surgery is now being considered a commodity that anyone can easily access.

“This makes doctors look at their operations as a kind of product or commodity,” he added.

The association said it ousted the president of Grand Plastic Surgery Clinic from its organization and had urged the police to initiate a full investigation into instances of malpractice at the clinic.

It said it will also define ghost surgery as illegal and file complaints should they find any other cases.

The president outlined a set of rules in an effort to elevate the ethical standards of cosmetic surgeons and prohibit malpractice or unethical operations from taking place.

The case involving the 19-year-old was brought to the public’s attention after her parents staged a rally near the Grand Plastic Surgery Clinic.

The woman went under the knife in December shortly after taking her college entrance exam.