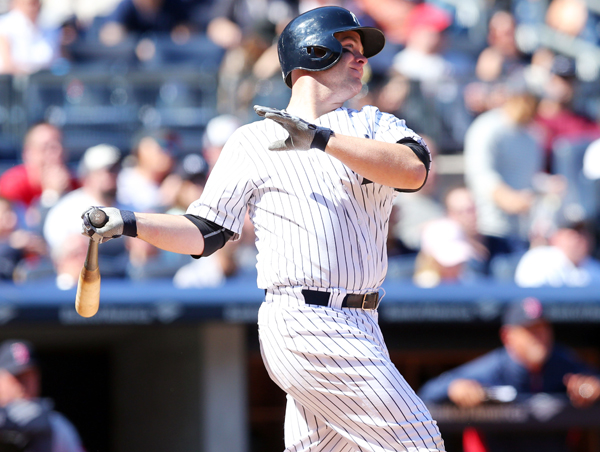 New York Yankees catcher Brian McCann (34) hits a two-run home run against the Boston Red Sox during the sixth inning of a game at Yankee Stadium on Saturday. [USA TODAY/NEWS1]

Brian McCann was far from panic mode. He was hitting the ball well, and figured positive results would follow. Still, he enjoyed seeing his drives wind up in the seats instead of someone’s glove.

McCann put an emphatic end to his season-opening slump, hitting his first two home runs for the New York Yankees to help beat John Lackey and the Boston Red Sox 7-4 on Saturday.

‘’I was pleased about my at-bats today,’’ McCann said.

Carlos Beltran, Alfonso Soriano and Kelly Johnson also connected as the Yankees scored all their runs on homers. Lackey was tagged for a career-high four home runs in 5 2-3 innings.

New York has won two of three in a series that wraps up Sunday night.

After striking out in the first inning and dropping his batting average to .158, McCann quickly reversed his fortunes. The seven-time All-Star who left Atlanta to sign an $85 million, five-year deal with the Yankees led off the fourth with a liner into the first row of the second deck in right field.

McCann hurried around the bases, and fans were still cheering when Soriano followed with his third home run of the week.

Beltran opened the sixth with a double and McCann homered to right-center. It was the catcher’s 10th career multihomer game.

‘’I’ve been seeing the ball pretty well to be hitting in the hundreds,’’ McCann said.

As for any concerns about a slow start, he said, ‘’I don’t look at it that way.’’

The Red Sox have been shifting on McCann during this series, moving an extra infielder onto the right side once they get a strike on him. Facing Lackey for the first time, McCann made moot any shift.

‘’I was not really concerned about it. I know he’s going to hit,’’ he said.

Girardi said he assumed the short right-field fence and the jet stream that carries the ball in that direction would benefit the lefty-hitting McCann.

‘’It showed up today,’’ Girardi said.

Also showing up: A missed call on a replay challenge.

Dean Anna of the Yankees was called safe on a double in the eighth inning with New York ahead 7-4. A television replay showed his right foot briefly came off the base as he stood up with shortstop Xander Bogaerts tagging him.

That’s not how Farrell saw it.

‘’We probably had five angles that confirmed his foot was off the base,’’ he said after the game. ‘’It certainly raises questions on if they are getting the same feed we are, the consistency of the system. So, it makes you scratch your head a little bit on why he was called safe.’’

Hiroki Kuroda (2-1) pitched into the seventh, and reliever Matt Thornton gave up Mike Carp’s two-run single that made it 6-4. With runners at the corners, Carp was caught stealing for the third out.

Shawn Kelley pitched a perfect ninth for his second save.

Lackey (2-1) threw plenty of strikes, but gave up 10 hits. He walked none, fanned six and missed a chance to get off to a 3-0 start for the first time in his career.

Jacoby Ellsbury bunted for a two-out single in the first and Beltran homered on an 0-2 pitch right down the middle. Lackey was already stalking toward the plate to get a new ball from the umpire before Beltran reached second base.

‘’I just left it over the plate. It wasn’t a very good pitch, up in the zone. One of those I’d like to have back, for sure,’’ Lackey said.

Johnson hit his third homer in the eighth.