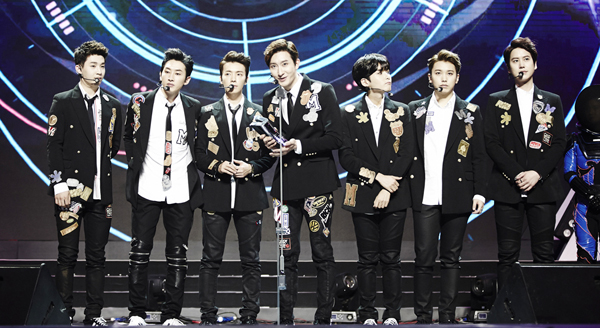 The awards are organized by Yin Yue Tai, an online video-sharing website, considered to be the Chinese equivalent of YouTube.

“Thank you for your support,” said the group in a statement. “We hope to show you our best in our coming albums as well.”

Super Junior-M is comprised of Super Junior members Sung-min, Eun-hyuk, Si-won, Dong-hae and Kyu-hyun, along with ethnically Chinese members Zhou Mi and Henry. It is focused on the Chinese market.

They celebrated their awards by singing their latest songs “Break Down” and “Swing” at the award show.

In addition to Super Junior-M, another K-pop group to win on Tuesday was Exo, which took home the award for Korean album of the year, for “XOXO: Kiss & Hug.”