On Wrigley’s 100th, Cubs stay true to their history

On Wrigley’s 100th, Cubs stay true to their history 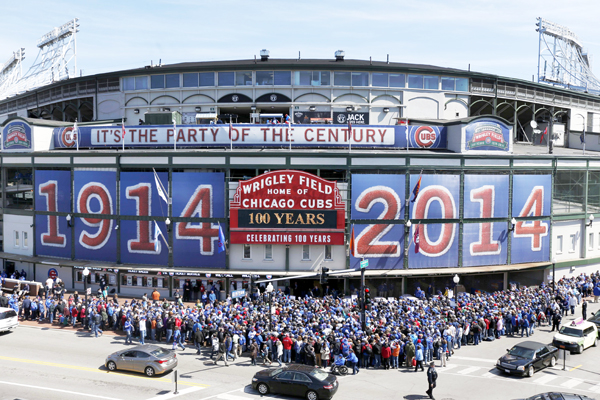 Cubs fans wait to enter Wrigley Field on the 100th anniversary of the first game at Chicago’s venerable ballpark on Wednesday. [AP/NEWSIS]

The Chicago Cubs celebrated the 100th anniversary of the first game at Wrigley Field in the most appropriate way: a gut-wrenching loss.

They entered the ninth inning with a three-run lead.

They were one out from victory.

And then they collapsed.

After an error by shortstop Starlin Castro, the Arizona Diamondbacks rallied for five runs in the ninth to beat the Cubs 7-5 Wednesday.

“That one finished not like we would have wanted, obviously,’’ Cubs manager Rick Renteria said. “It seemed like the inning kept opening up, and we weren’t able to end up in the end putting a stop to it.’’

Martin Prado hit a two-run single off Pedro Strop (0-2), Miguel Montero had a tying single against James Russell and Aaron Hill followed with a two-run triple off Justin Grimm.

The beloved ballpark, the second-oldest in the major leagues behind 102-year-old Fenway Park in Boston, opened on April 23, 1914, when the Federal League’s Chicago Federals beat the Kansas City Packers, 9-1.

The Cubs moved into the Friendly Confines in 1916, after the Federal League folded, and have established a tradition of beloved losers. The Cubs’ only World Series titles came in 1907 and ‘08, when they played at the West Side Grounds, and they haven’t even reached the World Series since 1945.

Before a crowd of 32,323 - about 9,000 under capacity - the Cubs led 5-2 in the ninth. Strop walked Chris Owings on four pitches and Castro allowed Tony Campana’s grounder to kick off his glove for an error. Castro tried to keep his left leg on second as he retrieved the ball, and second base umpire Brian O’Nora called the sliding Owings safe - a decision confirmed by the replay umpire in New York.

Pinch-hitter Eric Chavez walked on a full count, loading the bases, and Gerardo Parra struck out. Prado’s bouncer up the middle bounded off second base, eluding second baseman Darwin Barney and kicking into short right-center field as the Diamondbacks closed to 5-4.

Strop fanned Paul Goldschmidt for the second out.

Montero fouled off a 2-2 pitch, took a ball, then lined a tying single to right. Hill blooped a ball down the right-field line and Justin Ruggiano injured his left hamstring as he tried for a sliding catch near the foul line and the bullpen mound. He needed assistance to leave the field and was replaced by Ryan Kalish.

Samardzija allowed two runs and seven hits in 7 1-3 innings and is winless in 11 starts since beating San Diego on Aug. 24. He was supported by Ruggiano’s two-run homer in the sixth and a three-run fifth.