ATM inventor and CEO unshakable in his faith

ATM inventor and CEO unshakable in his faith 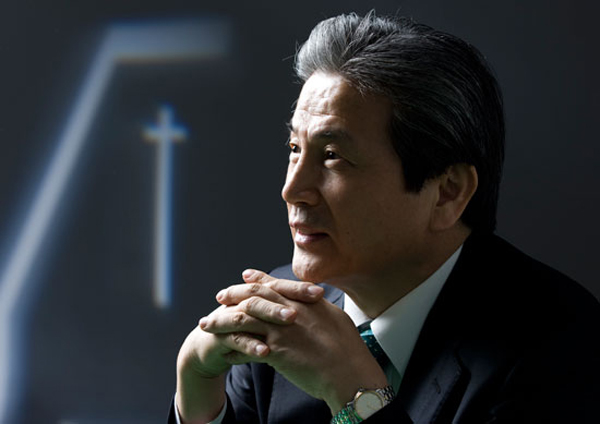 Sim Jae-su, CEO of Chungho Comnet Corporation, talks about attending a prayer meeting early in the morning for the past 16 years. By Kwon Hyuk-jae

Sim Jae-su, CEO of Chungho Comnet Corporation and inventor of the Korean ATM, heads to church early every morning to attend a prayer meeting as he has done for 5,200 days over the past 16 years.

The 58-year-old has also been a CEO for 16 years, an unusually long tenure for a chief executive, especially for one who has never studied management or administration. Sim majored in electrical engineering.

“I would run down the street at 4 a.m. to get a taxi to the company when an idea suddenly popped up in my head,” Sim said. “When the idea worked out to be a real software program, I couldn’t have been happier.”

Sim also invented the typing and printing software program for the Korean alphabet and Chinese characters. Thanks to his achievement, Korean typing is not organized in a line like the English alphabet, but divided by syllables.

Though Sim now is the CEO of a major company and has enjoyed success socially and financially, he knows what it is like to be desperate. He once had his house seized and saw his ATM company declared bankrupt during the Asian financial crisis.

Despite being unable to meet his payroll, he never gave up. His employees threatened to stop working, but Sim persuaded them not to leave the company. Instead, they stopped by the banks that used the ATMs and serviced the machines without pay.

“I felt a social responsibility as the engineer who made the machines,” he said. “I couldn’t disappoint the customers who believed in our products.”

Moved by his efforts to take responsibility for his products, Fujitsu, the Japanese multinational company and Sim’s former business partner, decided to take over the company on the condition that he stay on as the CEO. Sim at first rejected the idea because he thought of himself as an engineer, not as a businessman, but Fujitsu wouldn’t budge.

“I think my sense of duty was quite similar to Japanese entrepreneurial spirit and trust,” he said.

He knew nothing about running the company, but he found answers from contemplation and prayer.

“The characters in the Bible are not people of high intelligence or caliber,” he said. “But their attitude was to be ready to do the best in any condition or circumstance, and that matters more.”

His guidelines also apply when hiring new employees. Rather than using a resume or biographical sketch to screen job applicants, Sim focuses on attitude. The right people can be trained to do the job, but attitudes cannot be easily changed, he said.

There are 50 notes of enlightenment and understanding that Sim wrote from his prayer. He also published “Make Your Day Long,” a book about his management story. When he is asked about his secret to maintaining his position as a CEO for such a long time, his answer is always the same: “Life depends on your attitude.”