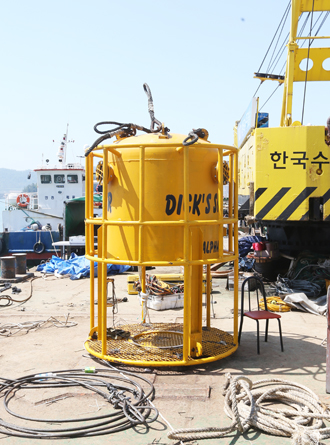 A diving bell was used for rescue operations yesterday morning and took three divers underwater. It was withdrawn, however, after divers failed to make any progress. [NEWS1]

An airtight underwater steel chamber known as a diving bell was finally employed yesterday in the waters near the sunken Sewol ferry, three days after it was brought to the scene of the accident, however, the rescuers who went down with it failed to make progress.

The diving bell emerged as a source of controversy after Lee Jong-in, president of Alpha Diving Technology, claimed in an interview with JTBC on April 18 that divers may continue operations for up to 20 hours underwater with the bell.

Lee originally brought the diving bell to the scene on April 21, though the Korea Coast Guard declined to use the equipment for its rescue operations at the time. However, they requested he bring it back three days ago so rescuers could test the equipment.

“A diving bell managed by Lee was placed into the water near the stern of the ferry,” an official from the government-wide emergency task force said yesterday at a regular briefing.

According to authorities, the diving bell was placed in the water at 3:20 a.m., but pulled back out nearly two hours later at 5:17 a.m. Three divers reportedly went down inside the chamber, and two searched the ship’s interior for 25 and 20 minutes each.

“It took 14 minutes for decompression, and the company reported that they could not find anything,” the official added.

Without locating the remains of missing passengers, Lee decided to withdraw the bell from the accident scene. It was brought back to Paengmok Harbor, the nearest harbor to the sunken ferry, late yesterday.

Lee reportedly said that he did not want to undermine the accomplishments already made by the rescuers, who he feared might be blamed if the bell proved to be a success.

Many of the relatives of the missing boarded the barge used to deploy the bell in the hopes that the chamber would help speed up the rescue operation. When the bell was brought back up, however, the disappoint across their faces was evident.

“I’m at a loss for words,” a family member of one of the missing told reporters at the Paengmok Harbor. “It was not a success. I’m so upset that they played with our hopes when our children are still inside the ship. Who said the diving bell was going to work?”

Lee disembarked from the barge about an hour after family members of the missing left and was hesitant in talking to the press.

When asked why he did not give up on the idea of using the bell, he answered, “I thought I had to use it because people expected something special from it. It was a good opportunity as a businessman to prove the equipment’s advantages.”

“I’m not just giving up using the bell, I’m also giving up the financial support the government guaranteed for it,” he added. “I will be blamed for failing [to prove its advantage] and my business will be affected, too. I am sorry for causing trouble and hope the Coast Guard will wrap up the case fully.

“I am also sorry that I could not meet the expectations of the families of the missing,” he added.