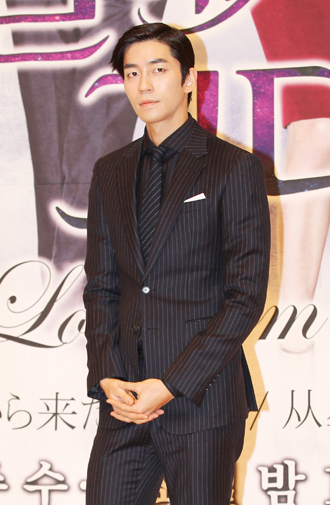 Actor Shin Sung-rok will appear in a romantic-comedy drama on KBS this June.

According to his agency, HB Entertainment, yesterday, Shin decided to join the KBS “Lover of Trot” team playing a businessman named Jo Geun-woo.

Though he has been in the industry for more than a decade, only recently has he risen to prominence. He showed an outstanding portrayal of a psychopathic character in the SBS drama “My Love from the Star,” in which he acted with Jun Ji-hyun and Kim Soo-hyun.

“In the new series, Shin will turn into a cynical businessman who runs an entertainment company,” an agency official said to local media. “But the character is also outgoing and humorous at the same time, so viewers will be able to take a look at a different persona.”

Joining Shin is actor Ji Hyun-woo, who was discharged from the Korean Army at the beginning of the month.

“We believe that Shin can create synergy with his new character in the drama, as he has established himself as a veteran performer on the musical stage for the past few years,” said the broadcaster.

The actor is currently starring in the musical “Le Roi Soleil” at the Blue Square in central Seoul.