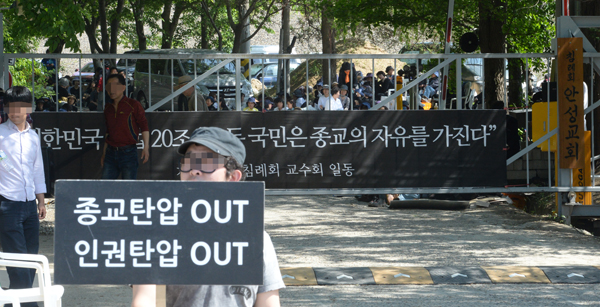 Some believers of the Evangelical Baptist Church barricade themselves yesterday at the main entrance to the church in Anseong, Gyeonggi. [NEWS1]

Hundreds of adherents of the Evangelical Baptist Church, founded by the de facto owner of the overloaded and doomed Sewol ferry, declared war on authorities trying to track him and his family down.

They said if prosecutors and police officers force open the gate of the church to arrest the owner, Yoo Byung-eun, and his eldest son, they would stage a “religious crusade.”

More than 100 adherents of the church, also called “the Salvation sect,” staged a sit-in protest yesterday inside the main gate of the church’s headquarters in a remote mountainous area in Anseong, Gyeonggi, to block prosecutors or police from gaining access.

The protesters insisted the church had nothing to do with the ferry disaster on April 16, in which 281 died and 23 are missing. They said they could not confirm whether any of the Yoo family members were in the complex, but claimed no one had seen any.

“It is totally nonsense to say there is a connection between the accident [the ferry’s sinking] and the Salvation sect,” Jo Gye-wung, an administrative official at the church, told reporters outside the church’s gate.

“We are trying to block the prosecution from entering the church. I am not sure whether Yoo Byung-eun is here or not, but there is no one here who has seen him in the church.”

Jo said there were about 300 or 400 believers in the church, who gathered after they saw news of the prosecution’s visit to the headquarters.

Another adherent told reporters that Yoo’s eldest son Dae-gyun was not in the church.

“Yoo Dae-gyun was not an important person for the church,” he said. “I’m sure the son is not here now.”

Half of the believers were their 20s or 30s.

About 20 security guards and other people surrounded the main gate to prevent reporters and prosecutors from entering. A sign was erected reading, “No crackdown on religion!” and “Protect the freedom of religion.” One protester announced through a megaphone, “We will be martyred if necessary.”

The prosecutors are trying to find and arrest Yoo Byung-eun, the de facto owner of Cheonghaejin Marine Company, and his eldest son, a major shareholder of the operator. The son is accused of illegally pocketing tens of billions of won in company funds and setting up a shell company to facilitate or conceal financial irregularities committed by his father. They both ignored notices from the prosecution to come in for questioning.

Prosecutors are trying to verify the company structure and the use of company funds to figure out if the owner is responsible for the ferry’s poor safety management, including overloading, which may have caused the maritime disaster.

Prosecutors raided the son’s house on Tuesday but failed to find any family members inside. They couldn’t get into the church’s headquarters without causing a violent confrontation with the adherents.

Starting Tuesday, the adherents blocked the gate all night long and took turns guarding it. Some chanted hymns, and others arranged chairs and provided water for reporters sitting outside.

They said they have a canteen that can accommodate up to 800 people in the headquarters.

One protester shouted yesterday, “There is nowhere for us to back off! We will stake our lives to protect the church!”

The prosecution yesterday said it put Yoo Dae-gyun on a nationwide wanted list, classifying him as a “Class-A” suspect. He can be arrested on the spot if found by police.

When asked about the church protest, a prosecution official said at a briefing, “We are investigating managerial problems at Cheonghaejin and its affiliates, not a certain religious group.

“We are aware of the whereabouts of Yoo Byung-eun,” the official said. “But we can’t tell you where they are right now.”