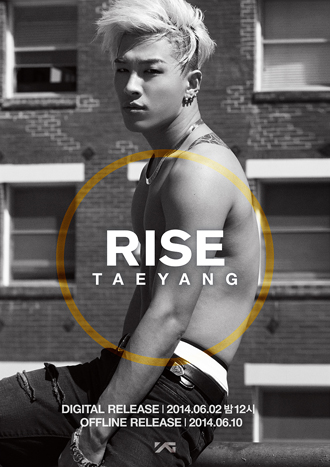 Hinting that Tae-yang’s long-awaited solo album “Rise” will launch on June 2, the singer’s agency YG Entertainment revealed a teaser image at midnight on Monday. Shot in Los Angeles in the beginning of the month, the black-and-white photo features the 26-year-old artist staring into the camera.

Tae-yang, who debuted in leading boy band Big Bang in 2006, has built his identity as a competent hip-hop and R&B musician by releasing several solo albums. In 2008, his debut EP “Hot” gained huge success in the local music industry, making the lead-off single “Only Look at Me” one of the most popular songs in the summer of 2008.

But since his first full-length album “Solar,” Tae-yang hasn’t completed any solo work for about four years.

The star’s soon-to-be-released studio album was first announced through a two-week promotion for the hip-hop track “Ringa Linga,” whose official music video gained more than 16 million views on YouTube.

The “Rise” CD will be available June 10.