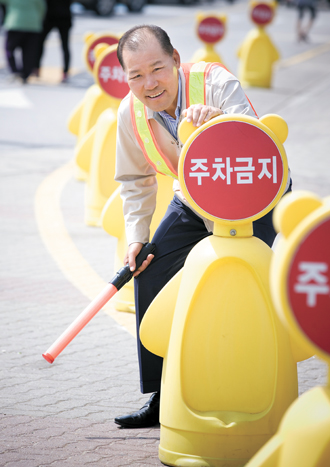 Choi Dung-kyu, the CEO of Daebo Group, controls traffic at the Hwaseong Rest Area parking lot, located along the West Coast Highway. He takes on that role during holidays and vacation seasons, when most rest areas are jam-packed. By Kwon Hyuk-jae

On a crisp morning two weeks ago at Hwaseong Rest Area, located along the West Coast Highway, Choi Dung-kyu, 66, was cleaning toilet bowls with his bare hands.

Scrubbing the holes where the water flushes out, he stressed that the most important part of cleaning them was to leave them smooth and slippery.

But Choi, who mentioned he arrived at 6:30 a.m., is not part of the janitorial staff. He’s the CEO of Daebo Group, which operates services in the construction, distribution, communication and leisure sectors.

Hwaseong Rest Area is one of the 36 business units under Daebo Distribution.

“For my part, it’s just a bit of an inconvenience,” said Choi, referring to his bathroom checkups. “The CEO has to get on his feet for the area to be polished all-around.”

During national holiday periods when the rest areas are packed with cars and people stopping during long drives, Choi stands on the rooftop with his walkie-talkie, working in tune with a crossing guard to control traffic in the parking lot.

But his extra concern for his business doesn’t stop here.

In terms of staff management, Choi encourages those in his office who are overweight to shed their extra flab.

A source from the administrative office said that Choi even has a “diet list,” with 39 employees currently registered, and those who meet their weight loss goals are rewarded with extra incentives. 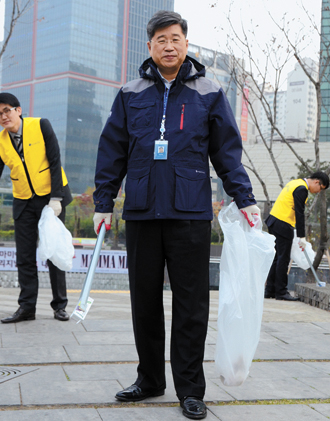 Kim Kyeong-won, the head of D-Cube City in Guro District in northwestern Seoul, picks up garbage near his workplace. By Kwon Hyuk-jae

“A sound family requires a sound physical condition,” the source said. “That way, the company can entrust them with office business, too.”

The insider, standing 178 centimeters tall (5-foot-10) and weighing 76 kilograms (168 pounds), emphasized that he was not on the diet list.

At the headquarters in Gangnam, southern Seoul, workers are also banned from using the elevator during lunchtime. If Choi catches any violators, their punishment is to walk back and forth 10 times from the first floor to the 10th.

And in the annual 10-kilometer (6.2-mile) race, those who cross the finish line later than Choi are penalized with an extra two-kilometer run.

“Health and diligence are the basis of the basic [virtues at Daebo],” said the administrative office employee.

Perhaps surprisingly, at D-Cube City, a complex in Guro District in northwestern Seoul that combines a hotel, residences, restaurants and cultural facilities, another CEO works along similar lines.

Kim Kyeong-won, 55, who runs D-Cube City, operated by Daesung Group, occupies himself with picking up garbage near D-Cube Park, where as many as 400,000 to 500,000 people pass by each day.

“I started picking up trash out of gratitude for my customers,” Kim said. “But now it has become a pleasant task.”

When asked whether his actions might be seen as boastful by his staff, he answered: “They might [see me that way] at first, but there’s nothing I can do. It takes time for their trust to build up.”