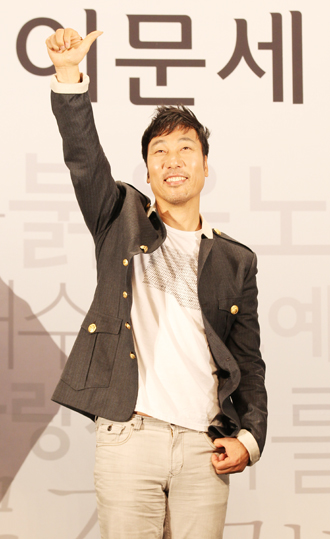 Lee Moon-sae embarked on his U.S. tour on Saturday, starting in New Jersey, and his first show attracted more than 3,000 fans, according to the concert’s production company, Moo Boong, yesterday.

The experienced singer kicked off his concert series at the New Jersey Performing Arts Center, for the first time in three years, and reportedly received a great response from fans after delivering the message “Let’s overcome the sadness and keep it up,” referring to the recent Sewol ferry tragedy in Korea in which more than 300 people died.

During the concert, Lee sang some 20 of his representative songs including “Sunset Glow,” “Girl” and “Gwanghwamoon Love Song.”

The 55-year-old performed for some 50,000 people at his Seoul concert last year, which was followed by a tour around 23 cities in North America and Australia.

This year, Lee plans to make stops in Toronto, Los Angeles and Sydney as well as New Jersey.

“Due to constant requests from overseas fans, Lee is planning to continue with his concert tour,” said an official from Moo Boong.