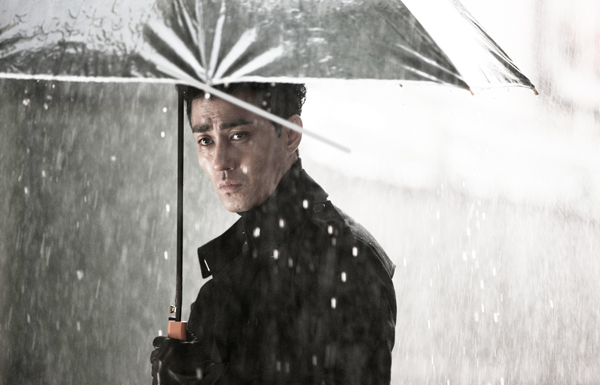 Director Jang Jin and actor Cha Seung-won team up for the third time in their newest film “High Heel,” which draws upon the fate of Ji-wook, above, a detective who seeks to be true to his inner self.Provided by Lotte Entertainment

Attempting to merge elements of film noir and melodrama certainly seems like a challenge, even for renowned director Jang Jin.

When Jang, once again, teamed up with actor Cha Seung-won, who he successfully collaborated with in “Murder, Take One” (2005) and “My Son” (2007), many members of the public were wondering how their latest movie, “High Heel,” would turn out.

What’s certain is that it’s a one-of-a-kind story, featuring a transgender character that has never before existed in the history of Korean film, in the unusual framework of noir infused with a strong love story.

The movie follows the life of Ji-wook, played by Cha, who seems like a tough detective on the outside. He is not afraid to confront mobs alone, attacking gangsters with all sorts of unusual tools, like forks and chopsticks, as well as with his bare fists and knives.

However, contrasting with his macho character on the job, Ji-wook has a huge secret that he loathes: a deep sense of femininity lies beneath his manly masquerade. No matter how desperately Ji-wook tries to break away, it has been haunting him for his entire life.

Cha revealed that when he first received the script and was offered Ji-wook’s role, he wondered why Jang would want to tell such a story.

“I wondered if it would gain the sympathy of the public,” said Cha at a press screening held Thursday at Lotte Cinema in Gwangjin District, eastern Seoul. “Then I thought it might become a work that wouldn’t be left as an embarrassment, even after much time passes. Also, I had faith and certainty in Jang that he would make the character more in-depth.”

Ji-wook is more than just an expression of femininity trapped in a man’s body and a man who secretly wishes to wear women’s shoes. He seems to represent all the people out there who go against their true selves to avoid being in the minority and remain loved.

Using an extreme case, Jang tackled the subject of being transgender, adding Cha’s experienced acting skills and fierce action scenes to make the story all the more dramatic.

Even when Cha, who is known for his masculine appearance and height, appears in red high heels, wearing heavy makeup and accessories, the agony lying beneath the costume is stronger than the visual awkwardness seen on screen.

Cha said he first went into filming thinking he would just need to grin and bear it. But as time passed, he began to focus more on Ji-wook’s unusual emotions.

“When I first saw Cha dressed in woman’s clothes, it was really awful,” said Jang on the actor’s transformation.

“However, when he stood in front of the camera, I thought to myself that it would work. I saw within Cha a femininely inclined person dressed up as a woman. Then, I realized that the outer appearance didn’t matter that much. It is a scene that I remember very clearly until now.”