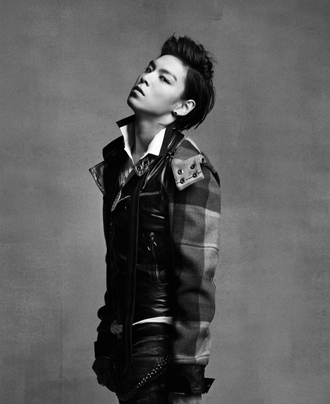 “I don’t get why people are so obsessed with taking their own selfies,” said Choi Seung-hyun, better known as T.O.P. of Big Bang, at Horim Art Center at Sinsa-dong, southern Seoul, on Wednesday. “Rather than promoting myself online, I would just focus on things of the real world.”

To celebrate the release of his first photobook, the singer opened an exhibition titled “1st Pictorial Records from T.O.P.” at Horim.

The photos were taken in New York in December by renowned photographer Hong Jang-hyun. “I wanted to capture and record myself as a 27-year-old man,” T.O.P. said.

After the rapper appeared in the 2009 drama “Iris” as a psychotic killer, he has since expanded his career in the film industry. He is currently the lead in the upcoming “The War of Flower” sequel.

When asked if he has any plans to make a solo album just like his bandmates G-Dragon or Tae-yang, he refused to give a concrete answer, saying, “I am not a multiplayer.”