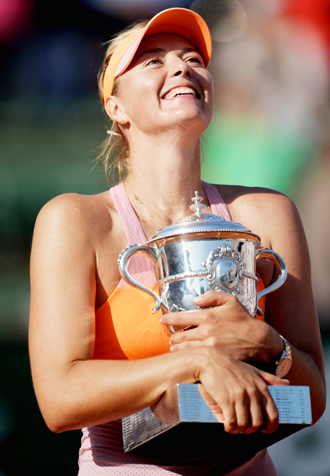 Maria Sharapova celebrates with her trophy after the women’s final match against Simona Halep at the French Open on Saturday. [XINHUA/NEWSIS]

PARIS - Her 12 double faults were a nuisance and the non-stop shrieks that punctured the air for more than three hours even made a baby wail, yet all Maria Sharapova will want to remember from the French Open is the moment she sunk to her knees in triumph.

The Russian had scrapped in eight major finals, winning four of them, but never before had she been taken to three sets in a showpiece match until she ran into a tireless Romanian named Simona Halep on Saturday.

Showing nerves of steel that would have made seasoned champions proud, grand-slam final debutante Halep fought, believed and risked everything for three hours and two minutes before a backhand into the tramlines allowed Sharapova to hug the Suzanne Lenglen Cup for a second time in three years.

A woman who had played three successive three-set matches to reach the final was left in no doubt about where her 6-4, 6-7(5), 6-4 win over Halep stood among her major wins.

“This is the toughest grand slam final I have ever played and all respect to Simona as she played an unbelievable match today,” an emotional Sharapova told the crowd during a victory speech in three different languages.

“I can’t believe it, seven or eight years ago I would not have thought that I would win more Roland Garros titles than any other grand slam.

“To think I won it twice... I’m so emotional right now, I don’t know what language to speak... English, Russian or French.”

While Sharapova clambered up the stands to hug her three-man entourage, which included coach Sven Groeneveld, a distraught Halep sat on her courtside bench with a towel over her head wondering what might have been.

“Yes. I was crying at that moment for a few minutes, and then I was smiling because ... it was my first grand slam final and I did everything on court,” said Halep, who was bidding to become the first Romanian in 36 years to win a grand slam crown.

“I played very good tennis, very good level. So I’m really proud about these two weeks. They were incredible weeks here ... and it was an amazing feeling on court today,” added Halep after picking up the 825,000 euro ($1.13 million) runners-up check that will go some way toward soothing her pain.

Sharapova’s purse was double that but for a woman whose worth is said to be close to $100 million, the prize money was largely insignificant. What she really wanted to take away from Roland Garros was the trophy.