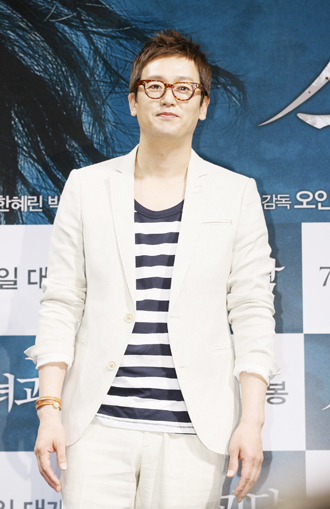 Actor Kim Jung-tae will drop out of popular KBS weekly reality show “The Return of Superman” after becoming involved in some serious controversy, according to local media reports yesterday.

His decision to leave the program came after he was spotted campaigning for Na Dong-yeon of the Saenuri Party, who ran for Yangsan city mayor in South Gyeongsang in the June 4 local elections. Technically, he did not breach any law for supporting a candidate, but public criticism against him became harsh when it turned out he had brought his three-year-old son Ji-hu to cheer for Na.

His wife, Jeon Yeo-jin, responded that the family was just on a “picnic,” and that she and her son had just stopped by to say hello to Na, who is an old friend of her husband. Yet many people felt that it is disturbing for a child to be exploited for political means.

“After much deliberation, we chose to get out of the show,” said Kim’s agency Taewon Art Media yesterday. “We are sorry for everything; we just want the people to know that there was no bad intention.”

“Return of Superman” is a reality show depicting the candid lives of celebrity families.