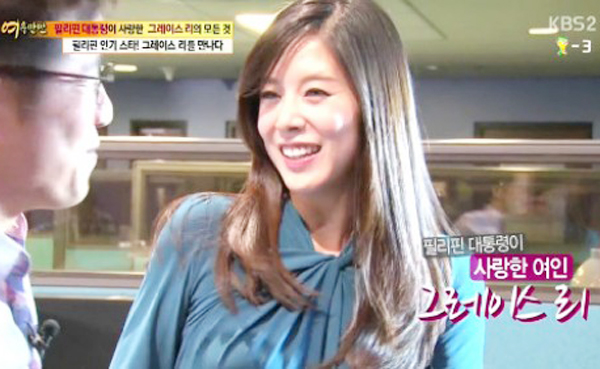 Grace Lee, who is better known in Korea as an ex-girlfriend of Philippine President Benigno Aquino III, said that she and the president weren’t able to develop their relationship seriously because of too much attention from the mass media.

Lee, a Philippine-based TV show host, appeared on KBS’s morning talk show yesterday and said that “it was true that we have been dating at that time.” In 2012, President Aquino III stated in a local interview that he “started dating again,” and soon after the romance between then
52-year-old state leader and a 29-year-old TV personality drew huge attention from both Filipino and Korean people.

When asked if her relationship is completely over with him, Lee noted “we still talk via text messages, and I think there’s a lot of possibility that we can be together when he comes down from the presidency.”

Born in Seoul in 1982 as Lee Kyong-hee, she moved to the Philippines when she was 10 years old for her father’s business. She speaks Korean, English and Tagalog fluently. Currently, she hosts a noontime variety show at a major television network in the Philippines.