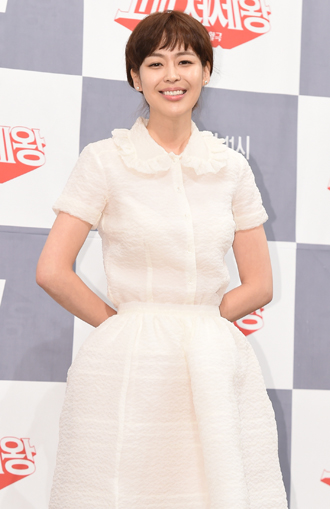 Actress Lee Ha-na said she is happy to be back on television drama after five years, at the upcoming tvN series “King of High School’s” press conference held at Nonhyeon-dong, southern Seoul yesterday.

Her last TV drama was the 2009 MBC drama “Triple,” in which she co-starred with actors Lee Jung-jae and Lee Sun-kyun.

“Over the past few years, I’ve read some great scripts [of TV dramas], but there was no specific story that made me wish so desperately to be a part of,” said the 29-year-old actress.

“King of High School,” follows the story of a delinquent high school student named Lee Min-seok, which will be played by actor and singer Seo In-guk of the 2012 drama series “Reply, 1997.”

He will meet Lee Ha-na’s character at an IT corporation that he inadvertently enters to help his brother.

“As a high school kid who starts to work in the nation’s most exclusive firm, viewers will be able to see the naked reality of today’s salarymen in Korean society,” said a tvN official to local media in April.

The first episode airs at 11 p.m. on Monday.