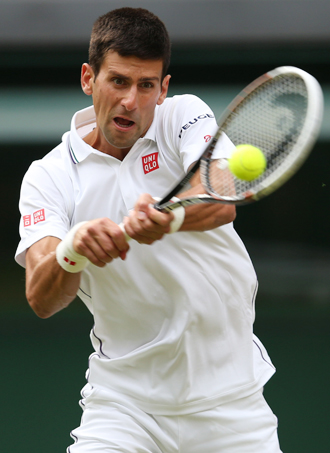 Novak Djokovic of Serbia hits a backhand against Radek Stepanek of the the Czech Republic in the second round at Wimbledon. [XINHUA/NEWSIS]

The Centre Court match at Wimbledon featured only two service breaks, but wait there was much, much more.

There was Novak Djokovic giving away a point to Radek Stepanek that could have been replayed a line call was overruled at a crucial time in the match, a move seldom seen in tennis; Stepanek cutting his right knee on one of his dozen or so falls on the grass during the three-hour, 17-minute second-round match; and on the final point of the match, a successful challenge by Djokovic on a ball called out, with Stepanek getting down on his hands and knees in a prayer pose.

It didn’t. Djokovic’s forehand cross-court pass was ruled in after the video replay showed the ball landed on the line. Djokovic completed a 6-4, 6-3, 6-7 (5), 7-6 (5) win. The two players, good friends and frequent practice partners, hugged at the net.

The third-set tiebreaker featured each player winning five points in a row - Djokovic to take a 5-2 lead, only to have Stepanek come back to take it 7-5.

“I was two sets up, I had some break-point chances in the third and should have closed it out in the third-set tiebreak,’’ Djokovic said. That Stepanek did, with his give-it-all style of play swaying the Centre Court spectators his way late in the match. Stepanek repeatedly made unsuccessful challenges on line calls. When he finally got one right, he looked up to the skies in relief.

Stepanek said he was surprised by Djokovic’s gesture to give him the point. At 5-all in the third set, Djokovic had a game point on his serve when Stepanek hit a backhand that was called long. After Stepanek successfully challenged the call, Djokovic conceded the point even though it could have been replayed.

“That’s why I asked the whole crowd to clap,’’ Stepanek said. “It was incredible sportsmanship and it proves just what a great champion he is.’’