Choreographer teaches Korean dancers how to be ‘Little Monsters’

Choreographer teaches Korean dancers how to be ‘Little Monsters’ 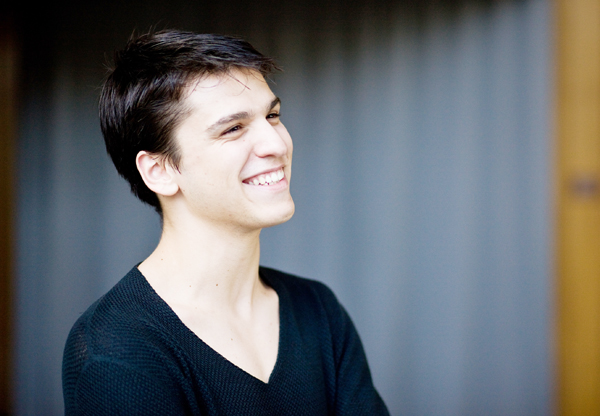 Demis Volpi, 28, joined Germany’s Stuttgart Ballet as a dancer in 2005 but became a resident choreographer of the company in 2013. Provided by Die Arge Lola

Despite the wet weather outside the Korean National Ballet, the young dancers inside were soaked in sweat, not rainwater.

Choreographer Demis Volpi watched the dancers’ every movement and emotion intently, but he certainly wasn’t about to give in to their desperation for a rest. When the time was finally up, each dancer was breathing hard, while one ballerina was nearly in tears.

“The choreography is quite tough,” said Volpi, 28, a resident choreographer at the Stuttgart Ballet in Germany. “It’s very technically demanding. And you have to push people really hard to get to that level where they can perform more comfortably.”

Volpi visited the Korean National Ballet for two weeks to personally train Korean dancers who will perform his pas de deux, or a dance duet between a male and a female, “Little Monsters” in November. 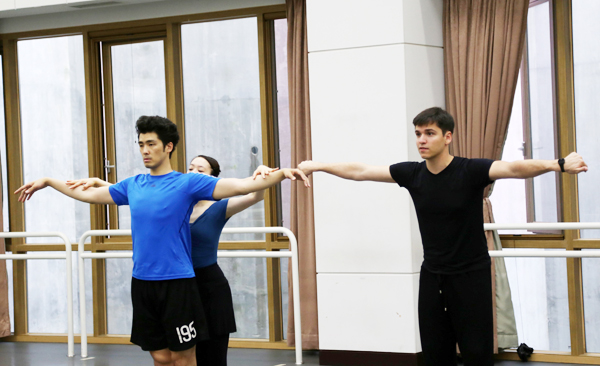 Usually, choreographers don’t fly to the opposite side of the world to visit a dance company in order to set the initial stage. Rather, they come just before the premier and work slightly on the dance. But Volpi made this visit to Seoul upon a request from his colleague, prima ballerina Kang Sue-jin.

Earlier this year, Kang was appointed as the artistic director of the Korean National Ballet, although she’s still a principal dancer at Germany’s Stuttgart Ballet.

After taking the position, Kang launched her first project to diversify the Korean National Ballet’s repertoire. To give the opportunity for her disciples to learn from internationally renowned dancers and choreographers, Kang invited Volpi as her company’s first guest.

“Normally, I only go when I am doing a new creation,” said Volpi. “I decided to visit Seoul because of Sue-jin, of course.”

Volpi started off at the Stuttgart in 2005 as a male dancer but later switched to choreography. He successfully became the company’s resident choreographer eight years later in September 2013.

Born in Buenos Aires, Argentina, Volpi attended the National Ballet School of Canada on a scholarship. The choreographer said he was “used to always being one of the best in class and one of the best dancers around” until he first joined the company as an apprentice in 2004.

“I always had a lot to do and I was always the guy doing the pas de deux or the solo,” said Volpi. “But in Stuttgart, I was just one in the crowd.

Volpi says when he first joined Stuttgart, he “wasn’t really even a standout in the crowd.”

“I was just a good crowd member, if you like,” said Volpi. “I was a good ballet dancer, a very fast learner, and I could jump into everything. But I wanted to be busier, and I wanted to do more things.”

During his two-week visit to Seoul, the Korea JoongAng Daily interviewed Volpi to hear more about his career. Here are some excerpts.

Q. How did you make the transition from corps member at the Stuttgart Ballet to resident choreographer?

A. Rainer Woihsyk, who runs the Noverre Society for young choreographers in Stuttgart, said to me to stop complaining about having nothing to do and give myself something to do.

So I created my first piece. Then the reasons why I choreograph changed over time. I realized eventually that choreography for me is a language. It was not something that I wanted to do but something that I needed to do in order to be able to communicate with the world. I also realized that the ballets that I make were not going to be made unless I made them because no one was choreographing what I wanted to see. So I decided to start doing that.

I heard that when you were just 3 years old, you told your parents that you wanted to do ballet. How can that be possible?

I jumped out of bed one morning and said I wanted to be a ballet dancer. I wish I knew why. My parents definitely didn’t take me to see ballet because they weren’t ballet fans, and ballet wasn’t something that you saw on television at the time. So we really don’t know.

My mother didn’t even know where I had heard this word. She kept on asking me, “What does ballet mean for you? What do you think that is?” My parents didn’t take me to ballet class right away.

But I kept asking every day to go to ballet so they finally said OK a year and a half later. So I did my first ballet class when I was 4 and a half years old.

I actually remember my first ballet class. It’s one of my first memories. I can actually remember telling my mom that it was the happiest day of my life. I started crying after my first class because I was so happy and I felt so at home. I found a language that I could really speak.

Tell us more about your work “Little Monsters,” which the dancers at the Korean National Ballet will be performing in November.

I first choreographed it for the Erik Bruhn Prize in 2011, which is a competition where different companies around the world get together. It’s sort of a special situation because you can’t compete unless you are invited. So when they asked me to do a piece, I choreographed this pas de deux for two dancers at Stuttgart and won the prize. I created it for them obviously also trying to show off what they can do.

It’s not really a story but more like a theme. It expresses a first encounter of two people - the feeling when you fall in love for the first time, what that feels like and other conflicts that arise. The show is only about seven minutes long and performed to three hit songs of Elvis Presley, “Love Me Tender,” “I Want You, I Need You, I Love You” and “Are You Lonesome Tonight?” The tender love obviously becomes more passionate and more problematic in a way. And finally, after the couple part from each other, it’s sort of a melancholic remembrance of something that was.

How are the Korean dancers handling it? They looked exhausted right after practice.

The biggest challenge for them, I think, was the fact that they are not used to my vocabulary. They are more used to a classical repertory so far from what they’ve done.

So I think the biggest challenge was to understand that sometimes you have to let go in a certain movement, but it doesn’t mean that you can just relax. You have to still be able to hold it back.

The movements may look relaxed, but the dancers should try to create an illusion of being relaxed. That doesn’t mean you can relax. I don’t think the Korean dancers are understanding that - the mechanics of that vocabulary. But now, I think we are past that point. It’s now about building up stamina and working in details of musicality and pushing for more.

I heard you choreographed the full-length production “Krabat” in 2013 with Kang in mind as one of the characters.

It’s based on a best-selling young adult novel by one of Germany’s most famous authors, Otfried Preussler. The devil in this book is a male character and he’s very different than the way I created him.

When I was conceiving the piece, I started thinking how to portray the devil. I wanted someone that could - with one gesture, with just one look, with just a turn of a head - fill up the stage and make everyone really afraid.

I just couldn’t think of anyone better than Sue-jin because she’s so powerful. I thought then the devil has to be a woman. So I recreated the character around her.

What are her charms as a dancer?

As a dancer, she’s incredibly powerful. She just has so much attention to detail in everything she does. In fact, the first time I saw her on stage, she was playing Tatiana in “Onegin.” It was the first time I ever cried in a ballet performance. It was just mind-blowing, how somebody could be doing all the technical work and be so real as a human at the same time.

A lot of great choreographers have come out of Stuttgart. There are theories of why that is, but it’s still a bit of a secret. I don’t think there’s a formula. But one of the things you need to do is educate the audience. I think it takes many years of educating an audience to be prepared to see things they don’t understand.

What we need is choreographers that are willing to take the risk and the company that can give them the space - space to make mistakes and to do something that maybe nobody understands. How are you going to try something new if you are suppose to succeed every time?

It was my luck in Stuttgart, I have Reid Anderson, who’s the director of the company. He’s been a great mentor to me and he has given me a space to create whatever I wanted, whenever I wanted. And out of the risk, you learn and you grow.