Nadal loses to teenager in day of Wimbledon upsets

Nadal loses to teenager in day of Wimbledon upsets 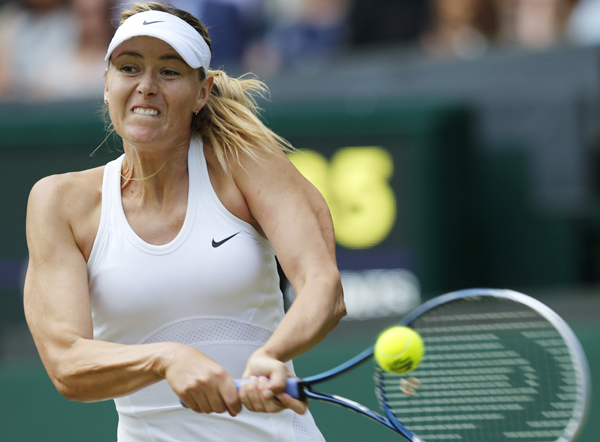 Maria Sharapova of Russia returns to Angelique Kerber of Germany during their women’s singles match at the 2014 Wimbledon Championships in London on Tuesday. [AP/NEWSIS]

Rafael Nadal ran out of comebacks at Wimbledon, losing to a brash, big-serving, between-the-legs-hitting 19-year-old kid who might just be a future star.

Maria Sharapova, somehow, seemed on the verge of a turnaround despite a flurry of unforced errors, saving six match points before finally succumbing on the seventh with - what else? - a missed shot.

And in the most striking sight of a memorable day of departures by past Wimbledon champions, Serena Williams couldn’t get the ball over the net in a doubles match with her sister Venus, stopping after three games because of what was called a viral illness.

“I was in a bit of a zone out there,’’ said Kyrgios, the lowest-ranked player to beat the No. 1 man at any Grand Slam tournament in 22 years.

“You’ve got to believe you can win the match from the very start, and I definitely thought that,” the 6-foot-4 Kyrgios said. “I’m playing some unbelievable tennis on the grass.’’

Playing in only his fifth major tournament - he got into the field thanks to a wild-card invitation - Kyrgios is the first man to reach the quarterfinals in his Wimbledon debut in 10 years. He’s also the first teenager to defeat the top-ranked man at a Slam since Nadal was 19 when he beat Roger Federer at the 2005 French Open. 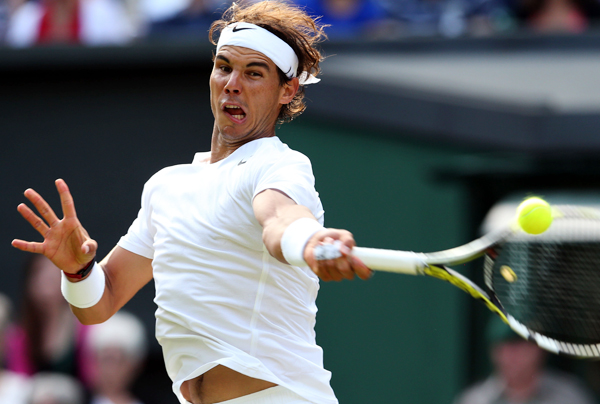 Spain’s Rafael Nadal returns the ball during his men’s singles fourth-round match against Australia’s Nick Kyrgios at Wimbledon on Tuesday. Sharapova and Nadal are both out of the tournament. [XINHUA/NEWSIS]

“We keep saying, ‘Who’s the next guy?’ And I think we may have found him,’’ seven-time major champion John McEnroe said on the BBC broadcast.

Nadal dropped the first set in each of his previous three matches before coming back to win. When he took the second set Tuesday, though, Kyrgios stayed steady.

“Kyrgios is young; he has nothing to lose,’’ said Nadal’s uncle and coach, Toni. “It’s like when Boris Becker won here. He was 17 and had a very good serve. He could beat everyone because of his serve. It’s the same with Kyrgios. He plays aggressively and without any doubts.’’

For Nadal, who won Wimbledon in 2008 and 2010, it was yet another early exit at the grass-court tournament against a much-lower-ranked opponent. In 2012, he lost in the second round against No. 100 Lukas Rosol. Last year, he was beaten in the first round by No. 135 Steve Darcis. Neither of those players is considered an up-and-coming contender like Kyrgios is, but the common thread among the trio was going for broke.

“The thing is, [on] this surface, when you have an opponent that decides to serve and to hit every ball very strong, you are in trouble,’’ Nadal said.

Kyrgios, who saved nine match points while beating 13th-seeded Richard Gasquet in the second round, showed zero hint of nerves. Indeed, he soaked up all the attention and adoration offered by the Centre Court crowd, particularly after an audacious trick shot: Facing the net at the baseline, he whipped his racket around his back and casually flicked a shot that sailed between his legs and over the net for a winner.

He joked about reading that his mother said she didn’t think he could beat Nadal.

“It actually made me a bit angry,” Kyrgios said, then noted: “I’ll just text her a smiley face.’’

On Wednesday, he faces No. 8 Milos Raonic of Canada. The other men’s quarterfinals - seven-time Wimbledon champion Roger Federer against good friend and Australian Open champion Stan Wawrinka - in an all-Swiss matchup; defending champion Andy Murray against No. 11 Grigor Dimitrov; and 2011 champion Novak Djokovic against No. 26 Marin Cilic.

The women’s quarterfinals Wednesday: No. 3 Simona Halep against 2013 runner-up Sabine Lisicki, and No. 9 Angelique Kerber against No. 13 Eugenie Bouchard. The semifinal on the other side was established Tuesday: 2011 champion Petra Kvitova against No. 23 Lucie Safarova.

“I felt like I worked too hard within the match to let it go the easy way. So I did everything I could in the end to try to save those,’’ Sharapova said. “I did, but I didn’t save the last one.’’