Ahead of tour, Girl’s Day thanks fans

Ahead of tour, Girl’s Day thanks fans 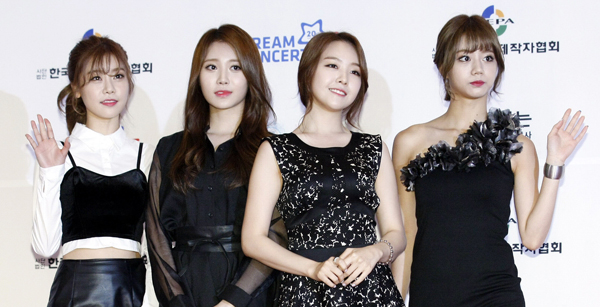 Girl’s Day delivered a thank-you message to its fans yesterday as the group celebrates the fourth anniversary since its debut.

“We are so thankful that you have been a great source of power for us and [continue to] stay with us,” said the four-member group in a letter posted as a photo on their official Twitter account. “The group will stay together for a long time to give you back the love we got.”

Since its debut on July 9, 2010, the group has had a stream of popular hits, including “Female President,” “Oh My God” and “Something.”

So far the group has released one full-length album along with four mini-albums and six singles.

“We dreamed of becoming singers so every moment feels like a miracle,” said the group. “You have given us a chance to realize this miracle and we are so thankful of that chance.”

To have more of an intimate time with fans, the members are getting ready to present their first solo concert “Summer Time” on Sunday.

Right after the concert, the group will release its new mini-album “Summer Party” on Monday.