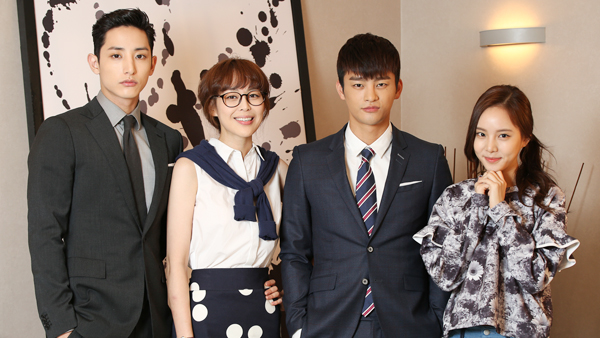 At a group interview Monday at a CJ E&M studio in Ilsan, Gyeonggi, singer-actor Seo In-guk, who stars as Min-seok in the tvN drama “High School King of Savvy,” explained that his character was charming both in his “candidness and boldness.”

The show, which currently airs Monday to Tuesday, traces the life of a varsity ice hockey player who is one day forced to join a circle of high-ranking executives at his father’s company by impersonating his older brother, who is nine years his senior.

“When I first read the script, I couldn’t figure out the exact intention behind the character,” Seo said. “However, now, I think that showing viewers Min-seok’s way of handling embarrassing or uncomfortable moments at work - which is not being afraid to face problems directly without giving excuses - was his purpose.”

When asked about the chemistry with his on-screen love interest Soo-young, played by actress Lee Ha-na, Seo answered that it feels “natural” to act with her.

“Even when the camera is off, we treat each other as if we are still in character,” he added.