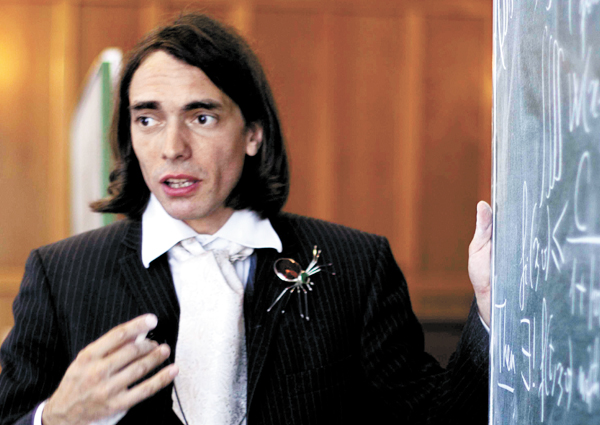 Cedric Villani always wears a spider brooch on the left side of his chest. He has tens of such brooches but has never disclosed why he wears them, not even in his email interview with the JoongAng Ilbo. Provided by Cedric Villani’s website

Cedric Villani, a professor at the Ecole Normale Superieure in Lyon and the head of the Institut Henri Poincare, will make his way to Korea later this month to attend the International Congress of Mathematicians (ICM) from Aug. 13 to Aug. 21.

Held every four years, the largest meeting of the mathematics community presents some of the brightest minds who have received the Fields Medal, the Nevanlinna Prize, the Carl Friedrich Gauss Prize and the Chern Medal.

The 41-year-old math prodigy is also known for his eccentric style - he wears a silk bowtie and a spider brooch - and as an enthusiast who would gladly appear in a movie to promote the beauty of mathematics.

At the conference, Villani plans to screen the French documentary “How I Came to Hate Maths,” which features him and was directed by Olivier Peyon.

“Enjoying [math] with the public is a huge joy and reward for me,” Villani said in an email interview with the JoongAng Ilbo. “I expect that the ICM will trigger new desires among schoolchildren to become mathematicians.”

The following is an edited excerpt from the interview:

Q. You are scheduled to visit Korea for the 2014 ICM. Will this be your first time in Korea?

A. It will be my first professional visit in Korea, but I have already been once in Korea for tourism. Korea has produced some excellent mathematicians, too, as will be apparent from the international conference. But Korea’s strongest international point is certainly at the level of its engineering skills. Recently, I was visiting the Total lab of the French oil giant, and they noticed that Koreans were by far the best builders of huge oil platforms in the world. Not to mention amazing companies like Samsung.

How would you explain your research in simple terms, so laymen can understand?

Kinetic theory and transport theory describe the evolution and prediction of gas statistics, taking into account the statistical nature of a gas [made of a huge number of particles] and the fact that particles are subject to motion and interaction. These equations are used also for the evolution of galaxies and plasmas, among other things.

Mathematicians are often stereotyped as inflexible and single-minded. However, the photographs and videos on your personal webpage reveal you are quite different from those stereotypical mathematicians. Do you enjoy interacting with the public?

Since [I was awarded] the Fields Medal, I gave hundreds of public lectures, interacted with artists [including Patti Smith, David Lynch and some other heroes of mine] and appeared in a movie. All of these events were received very positively by the public, which shows that there is a huge appetite on their part to better understand the role of mathematics in their lives, the role of mathematics as part of the human culture, the role of a mathematician as a creator and innovator, and the art and efficiency that there is in mathematics.

Will you briefly explain to us what “How I Came to Hate Maths” is about?

This is a documentary, or a road movie, showing how mathematicians really are - not fictitious heroes, but real ones. The movie shows how we behave, how we talk to each other, and so on, but also which are the subjects which make us vibrate: Where are the engineering applications, where are the important and sometimes serious consequences? It is the first time that a movie presents mathematicians in such a realistic way.

As the title of the film implies, many find mathematics difficult and distant. Why do you think that is?

Mathematics is tricky. There is no way around it. Because it is about learning how to think in a rigorous way, it requires rigor, but also tenacity and imagination. It is not obvious to understand the relation to our world. One has to be patient, curious, accept mistakes and improve. It is really learning to think differently.

What is mathematics to you? What personal meanings does it have, and what about it attracts you?

Mathematics has been my professional love and life, it has been a way to explore the world, to understand other sciences, but also to understand many things, which are valuable beyond science.

Mathematics has also been the way by which I have explored the geographical world, having traveled to more than 40 countries [22 countries in this academic year alone!] to tell, explain and listen about mathematics. It has also been my way into the brains and souls of other people.

It would be futile to try to isolate the precise features of what in there attracts me. You can’t explain the love of your life.