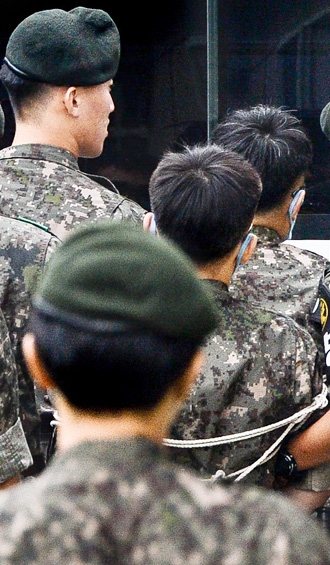 The soldiers who allegedly routinely abused a private, which led to his death, are escorted out of the fourth hearing at the military court. [NEWS1]

The Korean Army’s Chief of Staff Kwon Oh-sung stepped down yesterday, taking responsibility for a case in which a private, only identified by his surname Yun, died in April after enduring systematic bullying and abuse at the hands of his fellow soldiers.

“Kwon tendered his resignation [to take responsibility] not just for Yun’s case but for the series of other incidents that have taken place within the Army,” said Kim Min-seok, the spokesman for the Ministry of National Defense.

The series of incidents include the suicides of two young conscripts late last month who reportedly struggled to adjust to military life.

On July 28, the two soldiers, who were both listed as needing special attention, committed suicide in separate incidents. One was attached to the 3rd Infantry Division and the other to the 22nd Infantry Division.

The latter unit was also the scene of a grisly shooting spree in June in which a 22-year-old sergeant killed five of his fellow soldiers and injured seven others before fleeing his General Outpost in Goseong County, Gangwon.

Yesterday, in the fourth hearing in Yun’s case, held at the 28th Division’s military court, the military prosecutors who indicted six of the division’s soldiers for routinely bullying and abusing the 23-year-old private decided to add the charge of indecent acts by compulsion.

“We judged that their behavior, in forcing Private Yun to lick phlegm off the floor and apply anti-inflammatory ointment to his genitals, constituted indecent acts by compulsion,” a military prosecutor at the court said.

Attorneys for the defendants did not object to the motion, and the judges yesterday accepted the request, allowing the new charge to be added into the arraignment notice.

Private Yun, known to have joined the army last December, was deployed to the artillery regiment as a medic in February. There he faced routine mental and physical abuse, which eventually led to his death. He was reportedly beaten by his superiors on April 6, the day of his death, while he was eating and died of brain damage caused by asphyxiation.

Later investigation by the Ministry of National Defense showed that Yun’s fellow soldiers not only beat him, but also bullied him, sometimes making him stay up all night or once forcing him to eat a whole tube of toothpaste. The 23-year-old private was reportedly bullied because he was “too slow in his actions and speaking.”

The decision to add new charges was made at the insistence of lawmakers on the National Assembly’s National Defense Committee and the Legislation and Judiciary Committee on Monday after they questioned Defense Minister Han Min-koo and his senior staff.

Lawmakers on the two committees claimed the suspects, who were indicted for involuntary manslaughter or assault, should be charged with murder and forced indecent acts as well. They also blamed military staff members for not reporting the case properly or promptly.

An official at the Ministry of National Defense also said that Kim Kwan-jin, the defense minister at the time, only received a simple report concerning Yun’s death, which stated that a private had died from an airway obstruction after being beaten by his superiors. Kim apparently received the report on April 8, just two days after Yun died.

Current Defense Minister Han, who said he learned of the case after it was reported in the media on July 30, held a press conference at the ministry on Monday, during which he apologized for insufficient measures taken within the military to prevent such incidents. He also promised further investigation into the case.

Though the military prosecutors added a charge of forced indecent acts, a murder charge was not added yesterday.

“Prosecutors from the Ministry of National Defense will further investigate the case to decide whether to apply murder charges,” Lieutenant Colonel Kwon Dong-seon, the 28th Division’s troop information and education officer, said after the hearing. “The decision will come within a week after reviewing the previous investigation.”

The military prosecution is also considering adding charges of coercion because the suspects prohibited visits by Yun’s parents and banned him from participating in religious activities.

The judges also accepted a request by the prosecution to transfer jurisdiction of the case from the 28th Division to the higher court at the 3rd Corps Command. It is also what Defense Minister Han pledged when he gave his apology on Monday.

Accordingly, the next hearing, which has not yet been scheduled, will be held at the command.

Among attendees of the hearing yesterday were Lim Tae-hun, the head of the Center of Military Human Rights, and some 80 civilians watchdogs recruited by the organization.

The center publicized the case for the first time on Thursday.

Since its announcement, questions have arisen over whether the military tried to cover up the case, particularly because the case was disclosed three months after Yun’s death and because the Army’s descriptions on the circumstances surrounding his death were inconsistent.