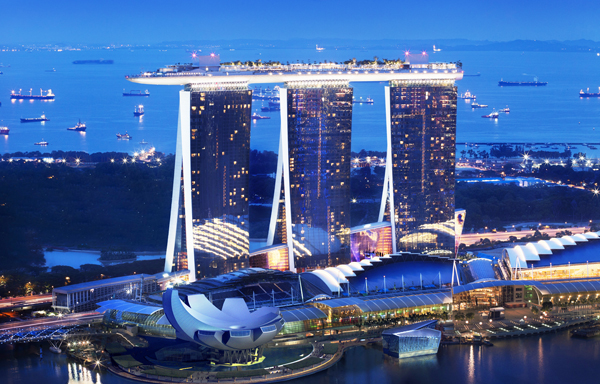 An aerial view of Marina Bay Sands, a Green Mark Gold building that will hold the International Green Building Conference (IGBC) this September. Provided by the Embassy

In order to make the city sustainable, the Building and Construction Authority (BCA) of Singapore decided to turn its dense buildings environmentally friendly. In 2005, the authority launched the BCA Green Mark, which is a rating system that evaluates a building’s impact on the environment and the sustainability of the city. Ultimately, the greener buildings will reduce the city’s carbon levels with an efficient use of resources.

The buildings are graded as Certified, Gold, Gold Plus and Platinum in ascending order for their environment-preserving capabilities. A Green Mark Platinum building is required to reduce energy consumption by 25 percent compared with a code compliant building.

Currently, more than 2,000 building projects in Singapore have achieved Green Mark standards. A recent study conducted by the BCA on 54 existing Green Mark commercial buildings showed that there was an average total energy consumption savings of about 16 percent, which means the building can save 120 GWh of energy each year.

Evidently, greening buildings provide tangible benefits for businesses such as lower utilities and operating costs as well as better indoor working conditions for employees. More importantly, businesses see it as a good opportunity to do their part for the environment as part of their corporate social responsibility.

The success of Singapore to build a greener city has been recognized by many international organizations such as the BCA Centre for Sustainable Buildings and in gatherings such as the International Green Building Conference (IGBC), hosted annually in Singapore.

This year’s IGBC, themed “Build Green: Lead, Engage & Sustain,” will take place at the beginning of September at the Marina Bay Sands Expo & Convention Centre, which is also a Green Mark Gold building.