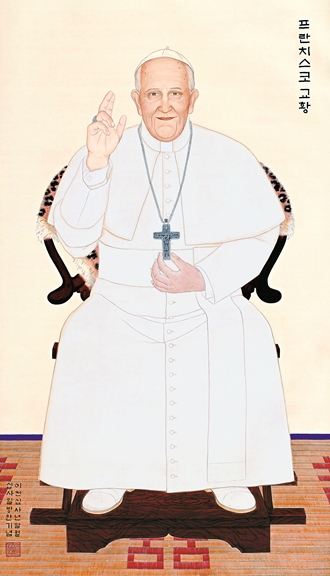 In commemoration of his visit to Korea, a portrait of Pope Francis based on traditional techniques will be presented to the pontiff today, the last of his five days in the country.

Seven portrait painters including Jo Yong-jin, a former art education professor at Seoul National University of Education, worked on the portrait for five months. They used a traditional technique called Baechae, in which colors are applied on the back of hanji, traditional handmade paper made from the bark of indigenous mulberry trees.

The technique was used to render a gentle, soft tone to portraits during the Joseon Dynasty (1392-1910). Instead of the traditional paper, the pope’s portrait was drawn on silk.

The team of artists completed two portraits and a bust of Pope Francis. One portrait and the sculpture will be stored in a new museum near Seosomun Martyrs’ Shrine in central Seoul while the other painting will be presented to the pope after a Mass for Peace and Reconciliation at Myeongdong Cathedral today.

“We completed two paintings and a sculpture of Pope Francis and delivered one of the portraits to Cardinal Yeom Soo-jung on Aug. 11,” said Jo.

In the portrait measuring 90 centimeters (35.4 inches) in width by 160 centimeters in length, the pope is dressed in white robes with white shoes. The portrait is a full-length painting with the pope seated.

Jo said that the artists tried to express the pope as he is, rather than exaggerating his features.

Cardinal Yeom was also engaged in the project, sharing his opinion on the portrait.

The artists painted the robe and shoes in white following Yeom’s idea that the color might go hand in hand with the pope’s philosophy emphasizing frugality and moderation.

Yeom also said that the color white in the Joseon Dynasty was a symbol of frugality and simplicity.

Jo said that he and his co-artists were apprehensive about making the bust.

“At first, we were worried a bit, because we’ve never seen him,” Jo said.

“But, after completing the sculpture, we grew more familiar with him. We tried to reflect the warmth that he always exudes through a gentle smile.”

“Since you tried to portray him through the mind’s eye, it well captures his image,” Yeom said.

The portrait is not the first artwork presented to the pope. People from Kkottongnae, a welfare community for the disabled and sick, presented the pope with portraits, cross-stitch works and paper cranes.

Meanwhile, today’s mass will epitomize the pope’s effort to embrace those in suffering and in need.

The Vatican has invited many types of people who suffered tragic events.

Three women who were forced into sexual slavery by the Japanese military during World War II will be seated in front of the church. A total of eight victims will be present.

Also invited were North Korean defectors, street cleaners as well as laid-off workers from Ssangyong Motor who have protested the layoffs.