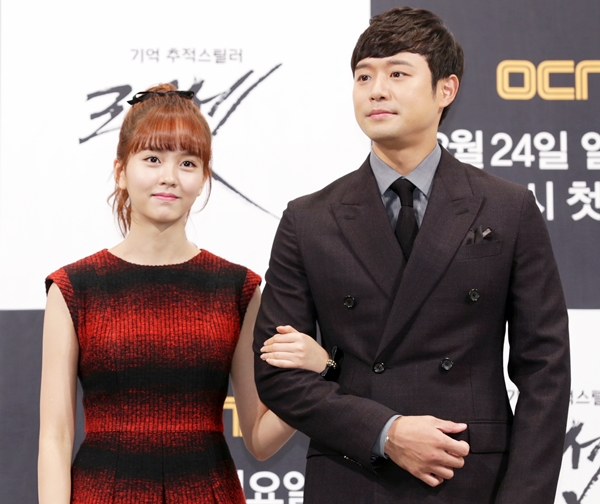 After years of presenting detective dramas, cable channel OCN is combining the style of a thriller with the genre it does best in “Reset.”

The 10-episode weekly series sees actor Chun Jung-myung, 33, and actress Kim So-hyun, 15, inspecting a suicide case. Chun plays the role of a prosecutor who speculates that his first love was murdered while Kim plays two roles: Chun’s dead girlfriend and a high school girl who looks exactly like her.

Before the drama launches Sunday, Chun and Kim, alongside other cast members, joined a press conference at the Imperial Palace Hotel in Gangnam District, southern Seoul, Wednesday, to share their filming experiences.

Q. What kind of chemistry can we expect from you two?

A. Chun: There won’t be any provocative romantic scenes. It’s more like the movie “Leon.” There will be some very subtle emotional exchanges.

Does the real-life age difference affect your working relationship?

Kim: I was so shocked to hear that [our ages] are that far apart since he looks so young. I think it won’t hinder audiences from falling for [the story] because I look mature for my age.

Chun, it’s the first time in three years for you to do a TV drama. How did you prep for it?

Chun: I was so eager to do well I even took an acting lesson. Depending on how much I prepare, it will show naturally through the character I play: There are some sides of me that only come out when I’m fully focused.

Another question for Chun: Did you prefer doing a thriller to a romantic comedy, a genre you’ve mostly focused on in the past?

Chun: I think I’m more suitable to play roles in a type of drama like “Reset,” rather than in romantic comedies. I’m mostly relaxed, but I also get automatically defensive when someone tries to harm me.

There are many young actresses gaining recognition these days. Kim, what do you have that the others don’t?

Kim: I don’t think I stand out more than others. I still lack skills and get confused so many times on set. Sometimes I understand what I’m supposed to do, but I have a hard time expressing the idea. I just rely on advice and comments from directors or other actors and actresses to learn on the job.

How do you like to play a lead in a drama for the first time?

Kim: I feel a huge responsibility, especially playing two roles. [I hope] audiences feel excitement and subtle butterflies-in-the-stomach feeling when they see me acting [as Chun’s first love] in the show.