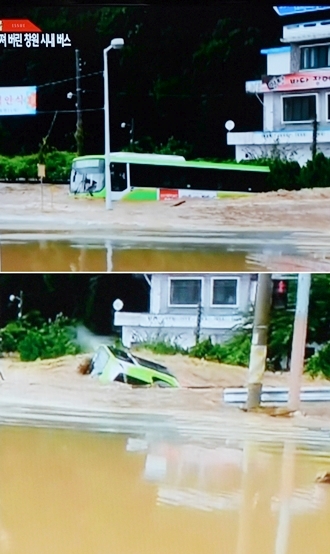 A bus sinks and washes away in a flooded as it catches on a bridge Monday in Changwon, South Gyeongsang. A 19-year-old woman was found dead in the wreck and six others, including the driver, are believed to be missing. [Stills from a video]

The torrential rain that hit the southeastern region of this country Monday resulted in fatal accidents not just because it was the heaviest rainfall in 12 years but because authorities didn’t take the proper precautions to protect people.

At least five people are confirmed dead, including a 15-year-old teenager and her 57-year-old grandmother whose car became trapped in a flooded underpass. The girl’s 40-year-old mother managed to get out of the car and survived.

The police knew the underpass was unsafe but didn’t block all roads leading to it.

The Korea Meteorological Administration (KMA) did not anticipate the localized downpour that began on Monday in Goseong County, located west of Busan.

On Monday, the KMA forecast that the precipitation in the southeastern region would be 30 to 80 millimeters (1.18 to 3.15 inches) and the National Emergency Management Agency (NEMA) issued heavy rain warnings for the region, advising evacuation from areas prone to floods.

But the rain clouds moved eastward and Busan subsequently received about 130 millimeters of rain in a single hour later that day, the heaviest downpour in the city since August 2002, when it received hourly precipitation of 162 millimeters.

On Monday, some parts of Busan received more than 200 millimeters of rain in total.

Monday’s torrential rain caused landslides and flooded the lower parts of the city, including some subway stations, but the heavy rain warning based on KMA’s forecast wasn’t detailed enough to let people know how bad it would be.

“I thought it was just a warning that’s commonly issued when it rains, but my car began to be submerged in rainwater,” said a 53-year-old resident of Busan. “I suddenly got scared and turned the car back.”

The police were blamed after a 57-year-old woman identified by the surname Na and her 15-year-old granddaughter were found dead later Monday in a car trapped in a flooded underpass in Busan.

Na’s 40-year-old daughter, who was driving, survived because she came out of the underpass to look for help, leaving the two victims in the car. But then the waters rose further and the two women were unable to open the doors of the car possibly because of pressure from the floodwaters.

Local police had blocked the main road leading to the underpass as it started to fill with water. But the victims approached the underpass from an alley in between it and the police blockade.

When questioned about its insufficient warnings Monday, NEMA said, “We have warnings for each emergency situation. But the guidelines do not require us to explain [emergency] situations in detail.”

But experts say authorities should come up with better guidelines.

“There should be a stronger level of warning for urban flooding caused by excessive water going into the drainage system,” said Lee sang-hwa, a civil engineering professor of the Dong-a university. The most fatal event on that day seems to have taken place in Changwon, South Gyeongsang, a coastal city between Goseong County and Busan. Changwon received the most precipitation out of any city on Monday - 269 millimeters in total. A bus was washed away in a flooded river, drowning a 19-year-old woman. Authorities yesterday said six more people, including the bus driver, are thought to have been in the bus and were still missing as of yesterday.

A response team comprised of local police, the Coast Guard, firefighters and local civil servants are looking for missing people even in the sea. But among the six no survivors or dead bodies were found as of yesterday.

The police suspect the bus was washed away after it took a detour to go around a submerged road. The black box retrieved from the bus is also being looked at to figure out the exact cause of the accident.