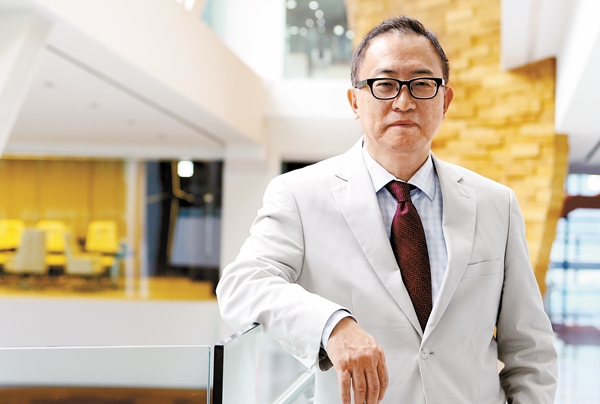 The growth story of CHA Hospital can traced to the history of reproductive medicine: Researchers there developed a remarkable solution to infertility, a condition the global medical establishment previously considered to be impossible to treat.

The team’s fertilization of immature eggs and frozen eggs changed the field of reproductive medicine. With the study, the team received numerous awards from the world’s most renowned medical societies and later exported the technology to the United States.

The American Society for Reproductive Medicine (ASRM) even created a stem cell award in 2011 in recognition of the medical group’s contributions in stem cell and infertility studies.

At the center of such achievements is CHA Chairman Cha Kwang-yul.

At the end of May, Cha opened a bioresearch complex in Pangyo Techno Valley, Seongnam, Gyeonggi, where the medical group’s seven biotech research institutes relocated to maximize cooperation.

The researcher hopes the 11-story research center will contribute in building a strong bioindustry in Korea.

Q. You’re already busy working as chairman of CHA Medical Group. What made you decide to take on another job as the first president of the research complex?

A. The complex brought together our seven research institutes, each of which studies a different field. Soon, when their relocation is complete, a total of 2,000 researchers from the industry and academia will be working there.

I hope this place enables communication and convergence among research sectors and study areas. For instance, two top researchers from reproductive medicine and cancer can easily start talking with each other. Such exchanges could initiate the birth of entirely new innovative technologies and nurture top researchers in the field.

However, such synergy cannot be effective before cooperative mechanisms really receive a boost. That’s why I thought there should be a manager who can really push the convergence process to accelerate.

How does this research complex enable convergence and communication?

All research institutes [under CHA Medical Group] that study different things such as dielectric substance, biomedical science, cancer and stem cells, as well as our animal testing center, pharmaceutical and biotech companies, are entering this complex. There’s not just one building; there is a big hall where researchers from different departments gather and freely talk about research ideas. I believe such communication can eventually lead to an actual joint project, experiments and commercialization of research results.

Such a system is unprecedented in the science field. Even at Harvard University, basic medical departments and clinical medicine buildings are separated by a street sitting between the two buildings.

The two parties don’t get to communicate largely due to psychological distance. This means that basic medicine researchers don’t know enough about actual diseases and clinical cases, while medical doctors who do clinical activities lack knowledge about drugs and related study areas. Closing the gap between basic and clinical medicine is the key solution to accelerating development of overall medical science. From this perspective, because CHA Hospitals are research oriented, our medical science professors, whose focus is on research, spend only two days a week meeting patients. The other days, they perform research at the complex.

What is the strength of CHA Bio and Disotech [the health care solution and drug developer at CHA Medical Group]?

The company started developing embryonic stem cells in 1998. It is one of few companies that has simultaneously conducted 30 years of reproductive medicine research and 20 years of stem cell studies.

The government support and public curiosity about stem cells rapidly got cold after Dr. Hwang Woo-suk’s research paper scandal. Despite the external difficulties, what made you continue your investment in this area?

Our body is made up of groups of cells, so any treatment should begin within cells. New technologies that enable the active use of stem cells [in medical treatment] will become a turning point for shifting the entire paradigm of medical sciences. I stayed firm, not being swayed from continued investment in stem cell research, because I had such a strong belief.

Recently, Prof. Lee Dong-ryul at our stem cell research center succeeded in developing a line of embryonic stem cells out of nuclei extracted from skin cells. His team was the second in the world to succeed in this experiment. His research is more advanced than previous stem cell transplant methods, such as the one that uses nuclei from newborn babies, because using stem cells grown out of DNA from each patient’s body is most effective in curing diseases. Actual patients in need of stem cell treatments are adults.

In addition to studies to develop embryonic stem cells, there are many studies focusing on developing adult stem cells such as cord blood stem cells and placenta stem cells. I think the commercialization of these studies will accelerate.

What kind of research will CHA Medical Group focus on in the future?

We are currently holding clinical tests in Korea, the United States and Europe to study stem cells’ application to the treatment of Stargardt disease, a genetic disease on the retina that causes eyesight loss. It is a joint project with Advanced Cell Technology, a U.S.-based stem cell treatment technology developer. We also are studying cerebropathia and Parkinson’s disease. Clinical testing for dementia treatment will soon begin.

What should happen within the Korean biotechnology industry to make it more competitive in the global marketplace?

The Korean government should change its R&D strategies to purchase and become an early commercialization leader of foreign-developed technologies currently in their clinical testing phase [rather than staying tied to the idea that we should develop our own technologies]. This would help Korean research institutes obtain enough competency to eventually outperform Harvard University and MD Anderson Cancer Center [in Houston, Texas].

In particular, the government should allocate a larger portion of its R&D funds toward opening more clinical research organizations. The biotech industry is a strategy-based industry in which the fame of becoming the “first” mover is crucial.

For example, if Korea begins clinical tests on treatment technologies for Alzheimer’s disease for the first time in the world, then all researchers who want to learn the technology will flock to Korea, as will investment. Naturally, fame and competency follows.

The government should spend more money on purchasing patents with great potential and grow the clinical testing sector.

How should Korea nurture biotech talent? What kind of values are needed?

The best lesson comes from strong examples of successful research, so young people can believe that doctors also can succeed and grow even further through research.

CHA University of Medicine has not received a dollar of tuition from students for the past 17 years. I believe such a philosophy [among doctors themselves] is crucial. They need to understand that it is more valuable to invest in talent when they’re alive and develop younger talent, than just donating some money after they die.

Researchers in biotechnology should be honest, because, for example, the success of infertility research can be determined by pregnancy, whereas the success of stem cell research can be proven only through data compiled by each researcher. Their personal beliefs and willingness to keep faith with the belief is really significant. Such ethical education also should be emphasized.