Mayweather masterful in a unanimous decision

Mayweather masterful in a unanimous decision 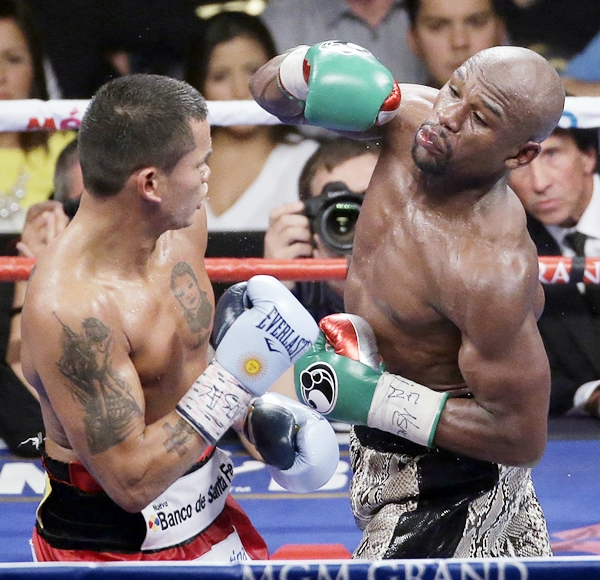 Floyd Mayweather Jr. mixes it up with Marcos Maidana, left, during their welterweight title fight Saturday in Las Vegas. [AP/NEWSIS]

Floyd Mayweather Jr. refused to allow Marcos Maidana to turn their rematch into a brawl, boxing masterfully to win a 12-round unanimous decision Saturday night in their welterweight title fight.

Mayweather remained unbeaten in 47 pro fights, drawing upon his 18 years of experience and frustrating Maidana the entire night.

The fight was a marked contrast to their first bout in May, when Maidana roughed up Mayweather in a close fight.

“I felt sharper than in the first fight, but my rhythm was off,’’ Mayweather said. “I got hit with some shots tonight I shouldn’t have gotten hit with. But that comes with the sport.’’

The fight was held up momentarily in the eighth round when Mayweather complained that Maidana bit him on the wrist while the two were tied up. Maidana was penalized for tripping in the 10th round.

Mayweather complained long after the first fight in May that Maidana was a dirty fighter and complained even more when Maidana seemed to try to hit him below the belt in a clinch in the eighth round, then apparently tried to bite him.

Mayweather immediately jumped back and gestured to referee Kenny Bayless that Maidana bit him on the wrist. He went to his corner and showed Bayless where the bite was, then went over to the Showtime announcers table to complain.

“He bit me!’’ Mayweather yelled.

Maidana would later be penalized a point for tackling Mayweather as he tried desperately to find something that would work against the undefeated champion.

By the end of the ninth round, though, Maidana was so out of sorts he went to the wrong corner when the bell rang.

“I thought I won the fight,’’ Maidana said.

Maidana didn’t win it because he spent many of the early rounds trying to figure out a way to get inside like he did in the first fight in May. Mayweather kept him at a distance, circling around and landing left jabs and hooks, then scampering out of the way before Maidana could respond.