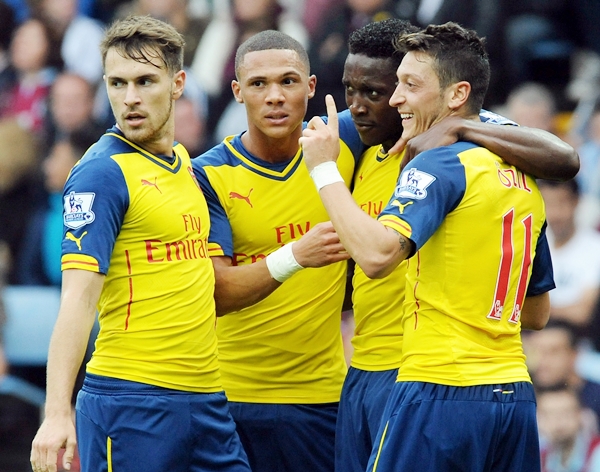 Mesut Ozil helped Arsenal shake off the hangover of a midweek pounding in Germany with a starring role in a 3-0 win at Aston Villa while sloppy Liverpool lost 3-1 at West Ham United in the Premier League on Saturday.

Arsenal’s record signing came in for particular criticism after the 2-0 defeat by Borussia Dortmund in the Champions League on Wednesday, but he came alive before halftime at one of Arsenal’s happiest hunting grounds.

His first away goal in an Arsenal shirt put his side ahead after 32 minutes. He then teed up Danny Welbeck to open his Arsenal account two minutes later, before an own goal by Villa’s Aly Cissokho ended the game as a contest after 36.

Victory extended Arsenal’s unbeaten run at Villa Park to 16 and lifted them to nine points in five games - three points behind leader Chelsea, which plays Manchester City on Sunday.

Last season’s runner-up Liverpool, which unlike Arsenal enjoyed a winning start to its Champions League campaign this week, slipped to defeat against West Ham United after conceding two goals in the first seven minutes at Upton Park.

Winston Reid and Diafra Sakho put West Ham ahead and, although Raheem Sterling replied before halftime, Liverpool suffered a third defeat in five league games this season when substitute Morgan Amalfitano scored on the counter late on.

Southampton is a point ahead of Arsenal after a 1-0 win at Swansea City, which had Wilfried Bony sent off in the first half.

Victor Wanyama’s 80th-minute goal moved the impressive Saints into second place with 10 points, the same as Villa, who until Saturday’s first-half capitulation had been unbeaten.

A sensational Nikica Jelavic volley and a thumping strike from Mohamed Diame had put Hull in control, but Cisse’s double lifted winless Newcastle off the bottom with three points.

Arsenal produced the perfect response to a week of criticism over their performance in Dortmund, although a sickness bug that swept the Villa camp helped their cause.

“Ashley Westwood was being sick in the warm up and Andreas Weimann was getting it during the game. Nathan Baker and Darren Bent were also out with it,” Villa boss Paul Lambert said.

“To play Arsenal you need everyone fit.”

There was little early sign that Villa were suffering during an even opening half hour.

It was the home side who almost struck first when Ciaran Clark’s header from a Tom Cleverley free kick was superbly saved by Arsenal keeper Wojciech Szczesny.

But former Real Madrid playmaker Ozil, taking up his favored role just behind striker Welbeck, lit the touchpaper for an exhilarating spell of football by the Londoners.

Welbeck played a perfect through ball and Ozil made no mistake with a cool side-foot finish.

Ozil’s inviting cross was then struck high into the net by a grateful Welbeck, who wasted chances against Dortmund in midweek and on his debut against Manchester City last weekend.

Villa was stunned and fell further behind a minute later when Cissokho diverted a Kieran Gibbs shot into his own net.

“I’m particularly pleased to get off the mark. It was a good team performance,” Welbeck said.

“They had their chances, but when we took our first one we looked in control of the game.”