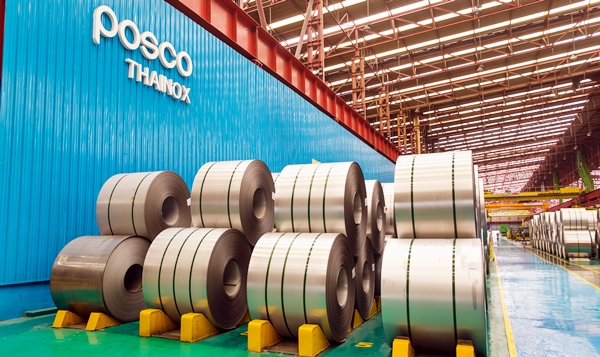 Stainless steel products are stored at Posco-Thainox’s plant in Rayong, Thailand, on Wednesday. Provided by the company

RAYONG, Thailand - Thailand is known as “the Land of Smiles” because people here are recognized as friendly, and most visitors come to the country for its natural beauty, cultural and historical heritage.

While many people visit Thailand to vacation at popular destinations like Bangkok, Pattaya and Phuket, Rayong is relatively unknown to most. But the province, which is about 200 kilometers (124 miles) southeast of Bangkok, is well known at least to Posco employees as the place where Posco-Thainox makes its stainless steel.

For locals, Posco’s 2011 acquisition of Thainox, Thailand’s only stainless steel manufacturer, was news worth smiling about, as they thought Korea’s largest steelmaker would enhance the company’s competitiveness.

“Posco’s acquisition gave us an opportunity to have competitiveness in the market, and I am proud and confident about it,” said Witoon Pornsiriprasert, a product quality technology director who has worked for Thainox more than 20 years. “Although our workload has increased, I’m not tired but work with a pride that I can contribute to globalization.”

However, for Posco the situation hasn’t been worth smiling about since Posco-Thainox, which the Korean steel giant owns 85 percent of, has not made a profit in the past three years. For this reason, after Posco Chairman Kwon Oh-joon took the helm this year, it was rumored that Posco-Thainox would be restructured.

But now Posco-Thainox has said it is ready to bring the smiles back to the Korean conglomerate.

A slump in the global stainless steel market was one reason for its weak sales, but Posco said that the R&D capability of Thainox also contributed.

“Although it isn’t a big amount, we have stayed in the black since last September and we have made a $1.1 million profit by the first half of this year,” said Oh Hyoung-soo, president of Posco-Thainox. “Although the change in the price of nickel is worrying, we will put our best effort to return to the black this year.”

Posco had a goal in mind when it purchased Thainox three years ago: to take a domestic market share of 60 percent, up 25 percentage points from 2011. Posco-Thainox’s current market share is about 50 percent. About 70 percent of Posco-Thainox’s products are sold in Thailand.

The company’s target for this year is to sell high-value products used for automobiles and electronics that are in demand by Japanese companies operating in the country. 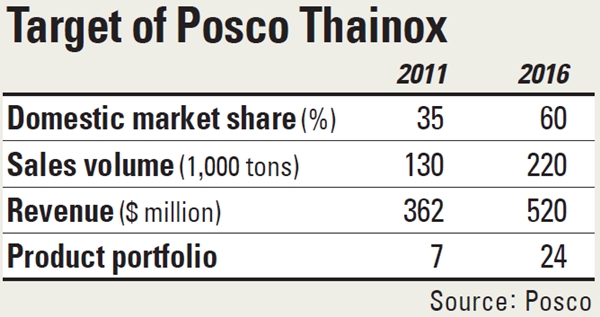 “Thailand is a nation that has very big growth possibility,” said Han Yeong-hwan, the CFO for Posco-Thainox. “Thailand is the world’s No. 9 producer of automobiles at 2.5 million units and it accounts for half of automobile production in Asean.”

According to the company, about 100,000 tons of stainless steel are used for automobiles, HDD and electronic appliances here, but Posco Thainox currently supplies only 20,000 tons in that area. The company’s overall production capacity is 220,000 tons.

“Our goal is to supply 50,000 tons a year in this high-value product market,” said Kim Hyung-mok who heads the marketing division at Posco-Thainox. “If that volume is achieved, we will be able to have both stable sales structure and profitability.”

Although competition with Japanese steelmakers is stiff, the company said it has some advantages and is trying to develop with help from Posco in Korea.

“About 125,000 tons of stainless steel used in Thailand is imports and half of that is from Japan because there are many Japanese auto and electronic companies here,” said Kim. “However, we can quickly appeal to these Japanese customers in Thailand due to cost, delivery and after-sales services.”

In order to make stainless steel, the company receives hot-rolled coils, also known as black coils, and processes them to obtain the desirable thickness. More than 90 percent of the black coils used by the company come from Pohang, North Gyeongsang, where Posco’s main steel mill is located.

But the main reason Posco is expecting success from Posco-Thainox is because of its corporate culture.

“Employees here do have good skills because most of them have working experience of [in the] two digit years,” said Han Seung-yong who leads the production division at Posco-Thainox.

As the largest stainless steel market in Southeast Asia, competition is expected to rise in the future as other steelmakers build their own production bases. But Posco thinks it won’t be easy for them to start work here.

“Because of political unrest, there is some risk for others to enter this market at the moment,” Oh said. “One of our roles here is to manage the company very well and defend this market.”