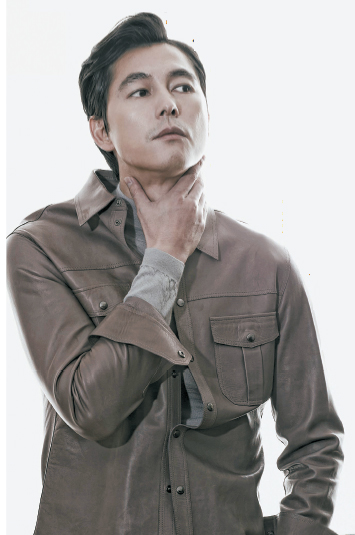 Hak-kyu is a poor blind man whose daughter Cheong, the story’s heroine, sacrifices herself to a sea god to raise money for the restoration of her father’s eyes.

But don’t expect Hak-kyu to feel guilty about the loss of his daughter. The character destroys the people around him out of greed, although he finally ends up trapping himself.

Jung, 42, said he experienced an agonizing feeling while making the film, yet also felt as if he had accomplished something by taking on this role as a bad guy. 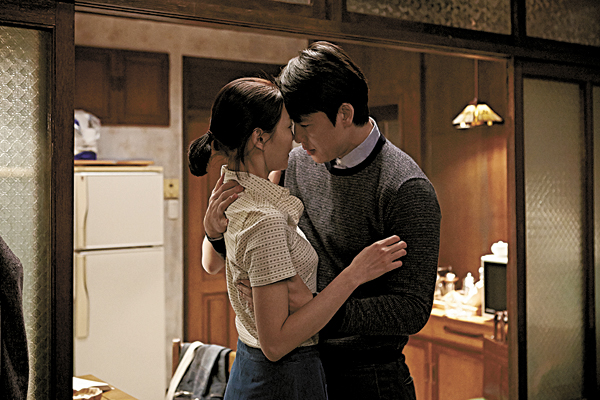 Jung and Lee Som in still photos from the movie “Scarlet Innocence”. Provided by CJ Entertainment

Q. Why do you think Hak-kyu introduces himself as a boring person even though he always seeks stimulation?

A. I understand what he wants to say through using the word “boring.” He’s a professor who has a restricted routine, which might make him unconsciously seek stimulation. As a result, he’s addicted to alcohol, gambling and sex.

Hak-kyu is quick to adapt to new situations. Why do you think this is?

The situations Hak-kyu faces are enough to frustrate him, yet he has a strong ego and a sense of self-preservation. It makes him good at enduring things. He always considers the best way to defend himself, and he’s far from sensitive to suffering from a guilty conscience.


Hak-kyu’s feelings towards Deok-yi [a woman with whom he has a love affair, played by the actress Lee Som] will cause diverse opinions within the audience.

That’s what I want. The relationship between Hak-kyu and Deok-yi is not simple, so there will be various points of views on their relationship.

The film doesn’t directly depict the characters’ feelings and doesn’t suggest an answer either. I believe this confusion makes it more fun.

Although Hak-kyu is a very greedy person who destroys the people around him, many people said they still warmed to him because he is played by you.

That’s what director Yim wanted [laughs]. He said he wouldn’t make this film without me. At first, I asked him, “What do you want me to do with this insane character?”

But after I read the script, I told him what I thought about Hak-kyu and it matched the director’s concerns, so he applied my opinions to the film.

Can you give an example?

There was meant to be a scene where Deok-yi wants to eat dumplings with Hak-kyu after getting an abortion at his request, but he denies her this. In the original script, Hak-kyu was supposed to buy dumplings and spicy rice cakes to give to Deok-yi, which in his own conceit he thought would be a comfort for leaving her alone in a hotel room. I asked the director to delete the scene because he looked like a pathetic idiot who I would love to beat up.

On the other hand, there’s a scene where Hak-kyu asks “What about sex?” when the doctor mentions the side effects he may suffer from after he loses his eyesight. That’s what I added.

So why did you agree to act as a character who you would like to beat up?

It seemed like it would be fun. I thought it would be a great opportunity to experience feelings I’ve never felt before as an actor. Of course, [the role] seemed very difficult, but I believed I would feel an accomplishment after filming ended. I did my best and I’m satisfied.

I assume it’s your first time to go nude in so many scenes, which is not very usual.

It wasn’t even my first time [laughs]. I starred in “Beat” and “Motel Cactus” and exposed my body in those movies. I didn’t set out to show my naked body in this film.

The bed scene and the blind performance are more about representing how the character feels, and I just wanted to fuse the emotions I’ve accumulated through my life into those scenes as an actor.

Lee Som’s age is about the same as yours when you starred in “Beat.”

Yet she doesn’t remind me of me when I starred in “Beat” [laughs].

If I have conviction in the script, I don’t care about reviews. The only thing I care about is communication on set and discussing the parts of the film that need to be changed.

It’s more important to give belief to my fellow workers instead of caring about previous reviews they received.

I met Yim several times before taking on this film and I felt so comfortable with him that I told him we should make a film one day.

The movie “Remember O Goddess,” which you produced and starred in, just finished shooting. I guess you’re busier now than when you debuted.

After I starred in “A Good Rain Knows” in 2009, I made excuses and neglected issues about my work, but soon I acquired a thirst for making films. I experienced a moment where I found that something was missing in my life.

Have you satiated your thirst for making movies now that you’ve filmed several?

Not yet. I think I need more.

Many news articles praised you highly and said that your performance in “Scarlet Innocence” is typical of Jung Woo-sung. What do you think about this?

I appreciate it, but the praise is a little bit too much for me. I can also make mistakes or be greedy sometimes. I feel uncomfortable when I realize there is a certain expectation to fulfill.

There are many new actors who regard you as a hero.

I’m very thankful. To make sensational films and be a good actor are my goals in life. I want to be a good role model who has a good perspective on movies, a nice attitude on set and I want to agonize over my acting for the sake of the new actors.

Do you feel that this is somehow your responsibility after a 20-year journey as a top star?

What kind of advice would you tell a younger actor?

That an actor must devote their life to the job in order to be a true actor. They also have to refuse to negotiate with anything to perfect the character they play. Additionally, after the stress of performing, there is always a sense of accomplishment.

You just started producing a film. Do you think this will give you an opportunity to try out other positions in the movie industry?

I don’t know yet. In the case of “Remember O Goddess,” I wanted to keep the script intact, so I decided to be a producer on the movie. The film is the director’s debut, so I just tried to connect experienced producers together.

People think a distributor has more power than a producer.

You have to fully understand what is going on in the market and accept it. If you get money from others, you have to listen to what the investors say.

It doesn’t make sense to assert that the distributors don’t know anything and refuse their opinion when you’re making a film with their money. If you don’t want to take money from investors, you have to make a low-budget film.

In my opinion, the film industry is in a transition period now and there are many problems to solve systemically. This is not about power. A film is made with money, and it is very natural that the capital has the power.

But I want to see you as “actor Jung Woo-sung” more than as a producer.

You don’t have to worry [laughs]. I’m the one who reflects my own voice into a movie, even when I produce a film.

Why don’t you act with your friend Lee Jung-jae in a movie?

Lee Jung-jae and I both feel very positive about acting in a movie together. We’ve been suggesting it for about one or two years. But the most important thing is the script.

Once, there was a person who wanted to produce a film where I would have been acting with Lee Jung-jae. But even if it sounded really good it would have taken a lot of time and our schedules were too tight. Still, please give me a wonderful script [laughs].