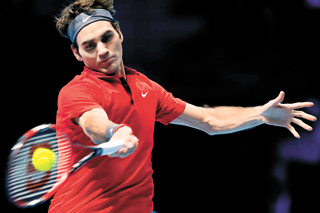 Roger Federer made the most of Kei Nishikori’s erratic play Tuesday to secure a 6-3, 6-2 victory and move closer to a semifinal spot at the ATP Finals while Andy Murray posted his first victory to stay in contention at the elite tournament.

Federer, the most successful player at the year-end championship with six wins, would have progressed if Milos Raonic had defeated the home favorite, but the former Wimbledon champion completed a 6-3, 7-5 win over the Canadian newcomer in a dour match that produced very little excitement.

Murray, who had lost his two previous encounters with the big-serving Raonic, ensured some suspense for the last day of matches in his group, with all four players retaining a chance to progress.

“It’s a nice match on Thursday to look forward to, it’ll be a great atmosphere again,’’ said Murray about his final round-robin match against Federer. “It’s always a pleasure to play against Roger. He’s one of the greatest players that has ever played so to get the opportunity to play him in an atmosphere like this is excellent.’’

After losing his first match to Nishikori in straight sets, the Scot said he found inspiration in his coach’s experience to bounce back.

“Amelie was saying one of the times she made the final of the year-end championships, she lost her first match 6-2, 6-2 against [Nadia] Petrova. Obviously it wasn’t feeling great,’’ said Murray. “Then she went on to reach the final. It’s nice to have these sorts of discussions, having someone that’s experienced having been in a tough situation after the first match.’’

In the afternoon session, Nishikori made it easy on Federer as he struggled with consistency throughout. The 24-year-old U.S. Open finalist showed his vast array of shots with some superb backhand winners but made a total of 30 unforced errors and, once again, could not find his serve.

“He’s shown in the past when he gets the upper hand against any player from the baseline, he’s very difficult to beat,’’ said Federer after moving to 2-0 in his group. “Today for some reason he couldn’t get it done.’’

Nishikori, one of three debutants at the O2 arena this year, had been able to make up for his poor service percentage in his opening win over Murray with his powerful groundstrokes. Against Federer, it was a different story.

The Swiss served well and played aggressively on Nishikori’s second balls to cut short rallies. After a tight third game where the Japanese could not convert two break points, the Swiss produced a superb crosscourt forehand passing shot to earn a first opportunity to open up a 3-1 lead, and seized it with another forehand winner.