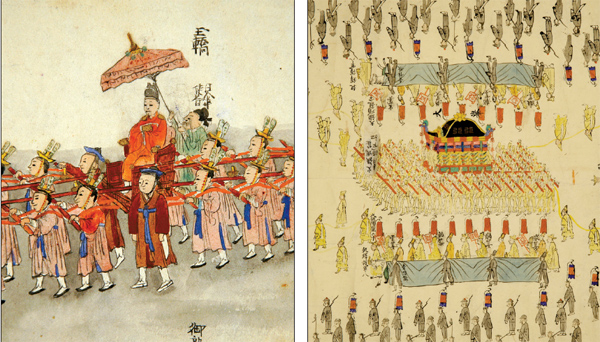 A depiction of a royal procession featuring Emperor Gojong (left) differs clearly from the drawing of Empress Myeongseong’s (1851-1895) funeral procession (right). Provided by the museum

Korea’s Empress Myeongseong (1851-1895) was killed by the Japanese on Oct. 9, 1895, but her official funeral took place two years and two months after her death.

Her burial procession - drawn by an unknown artist some time in the late 19th century - displays how the Korean government attempted to give her the honor that she deserved, despite the delay and the dire political circumstances at the time.

The painting, depicting a colorful, intricately decorated funeral bier and men on horses, is on display at the “Modern Korean Painting from the Great Han Empire to the 1950s” exhibition at Ewha Womans University Museum in Seodaemun District, central Seoul.

The memorial was held at the beginning of the Daehan Empire (1897-1910), which refers to the short-lived, unfortunate era during which the dying Joseon Dynasty (1392-1910) declared itself to be a new realm in a desperate attempt to fend off the Japanese, who were trying to annex it. 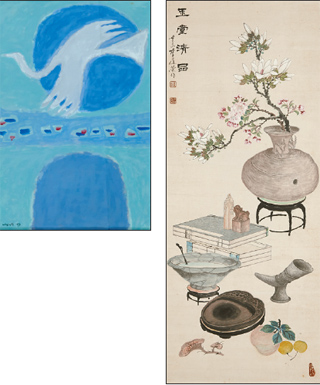 An exhibition at Ewha Womans University intends to show how art progressed in the late 19th century and early 20th century in Korea. Many modern and contemporary art pieces are on display, including “Untitled” by Kim Whan-ki (left) and a painting by Lee Do-yeong (right). Provided by the museum

Along with the funeral depiction is a painting of a royal procession featuring Emperor Gojong (1852-1919), her husband. But the difference between the two paintings is clear.

The latter, presumed to be drawn some time between 1897 and 1930, is more cartoon-like, and even shows the king’s face in detail - which was never seen in Joseon’s uigwe paintings of royal rituals.

“It was during this time that Korea adopted new cultures and technologies,” said Kim Ju-yeon, the museum’s curator. “Portraits that are drawn by looking at photographs and designs for stamps and textbooks … show the empire’s attempts to open a new era also through culture and arts.”

Through the exhibition, the museum aims to explore Korean paintings of the late 19th and early 20th centuries.

This period was one of the darkest in Korea’s history. It was when the country’s 500-year Joseon period collapsed and when Japanese colonization (1910-1945) ensued. And even after liberation from Japan, political chaos and ideological clashes led to the 1950-53 Korean War.

Then came the division of the country.

Art, despite the circumstances, changed and progressed during this time, as Korean artists accepted Western influences, as seen in the painting of a procession of Gojong.

About 100 pieces from the Daehan Empire to the 1950s are being shown, mostly from Ewha’s own collection.

One section is dedicated to seohwa, or traditional Korean painting that uses calligraphy, often including poetry.

In the 1910s, many schools for seohwa sprung up as artists attempted to pass down the tradition amid the influx of foreign culture. In later years, art historians say, people learned seohwa as a hobby.

Interestingly, the show sheds light on the versatility of the Korean artists who were active at the time. Case in point: Hwang Cheol (1864-1930) and Ji Un-yeong (1852-1935). The two were seohwa artists but also photographers; Hwang had a photo studio in Shanghai, China, while Ji had one in Kobe, Japan.

Go Hee-dong (1886-1965), Korea’s first Western-style painter, is also another multifaceted Korean art whose work is being shown at the Ewha exhibition.

Although his early pieces were oil paintings, his art later created a whole new genre that merged Western-style techniques with traditional Korean drawings.

The exhibition additionally displays Western-style artwork by Korean painters in the early 20th century, most of whom studied either in Europe or Japan and then came back home. They include still-life paintings and portraits of a number of artists as well as a few pieces of abstract art such as that of Kim Whan-ki (1913-1974).

“We hope the exhibition shows how modern meanings and symbols pop up in Korean art during the Daehan Empire, as well as how the concept of art changes amid tradition in the early 20th century,” Kim of Ewha said.