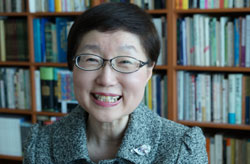 
The linguistic challenges associated with the structural and grammatical gaps between English and Korean mean that translating literature from one language into the other can be a delicate task. A successful translator should understand the implicit nuances that come with the cultural differences and get them across.

Suh Ji-moon began working on translating a novel by author Kim Won-il while she was battling cancer.

“I tried to pull myself together while I recovered from cancer surgery in 2008,” said Suh, who also serves as professor emeritus of English at Korea University.

“I spent two hours translating ‘House with a Sunken Courtyard’ every day,” she said.

Her efforts have paid off. On Monday, Suh won the top prize at the 12th annual Korean Literature Translation Awards for her endeavors.

The award is given by the state-run Literature Translation Institute of Korea.

Although the daily task gave her a sense of ownership over her life, the job itself was never easy.

“Consulting an English dictionary is simply not enough to elucidate the implications and subtle nuances in a novel,” she noted, “so I needed to brace every nerve to use the right words in every sentence, which is really grueling and sometimes takes a lot of time.

“But when I get the message across from Korean into English, the feeling outweighs all the hardships I went through.”

She warned that translating word by word is not an ideal way to convey the true message.

“Instead of translating word by word, a translator should get into the unconsciousness of the author, understand their intentions and translate the content into another language in a way that restores the original intention,” Suh said. “Also important is to help foreign people understand the interactions and behaviors of the characters in the context of a certain society.”

All of this is quite challenging, according to Suh, but at the same time this is why the role of a translator is so important.

Other winners of the prize include Russian scholar Maria Kuznetsova for translating Lee Seung-woo’s 2000 novel “The Private Life of Plants” into Russian.

Translator Im Yun-jung received an award for translating Han Kang’s 2007 novel “The Vegetarian” into Portuguese. She immigrated to Brazil when she was 10 years old.