Henry ends MLS career without his No. 1 goal

Henry ends MLS career without his No. 1 goal 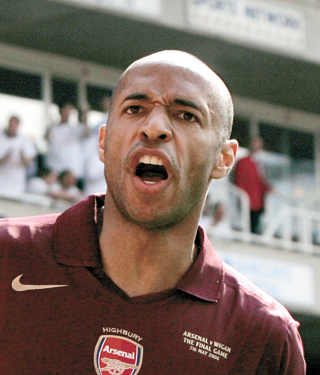 The 37-year-old French star made the announcement Monday, two days after the Red Bulls lost the Eastern Conference final to the New England Revolution. And he said he made the decision back in 2010 to leave when his contract expired.

“I am taking this opportunity to announce that, unfortunately, Saturday was my last game for the New York Red Bulls,’’ Henry said in a statement released by the team on Monday, local time. “The decision has always been that I would leave after the duration of my contract, and although that was never going to change, I didn’t want it to distract from the progress of the team.’’

A former Arsenal and Barcelona standout, Henry did not say whether he’s retiring. He plans to take a few weeks to decide what to do next.

Henry joined the Red Bulls from Barcelona after the 2010 World Cup. He had a $3.75 million salary this year and $4.35 million in overall compensation,

“Thierry Henry, an icon of the world’s game, has been a wonderful player for the New York Red Bulls and a major influence on the development of MLS,’’ said the Red Bulls sporting director, Andy Roxburgh.

Henry played in 122 matches for the Red Bulls, scoring 51 goals and adding 42 assists, tops in franchise history. His goals total was second to Juan Pablo Angel’s 58, 14 of his goals were winners and 11 of his assists set up winning goals, also tops in club history.

Henry also scored some of the league’s most spectacular goals, including one that went directly into the net on a corner kick against Columbus in 2012.

Henry said he enjoyed his time in the MLS and living in the area: “A special mention must go to the Red Bull fans who have supported this team through the good, the bad and the ugly times in the sun, rain and snow. You guys have really meant a lot to me and thank you for all your wonderful support.”